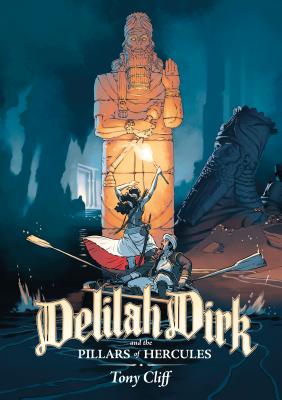 Delilah Dirk and the Pillars of Hercules

Having survived a close shave in England, where she was falsely accused of spying for the French, Delilah has set out with her companion Selim for more agreeable adventures in central Asia. But when she stumbles on an artifact that may be a clue about the location of the legendary third pillar of Hercules, Delilah and Selim are drawn back to Europe on an Indiana-Jones-style archeological caper that pits her against a ruthless enemy who is murderously intent on preventing Delilah from speaking out against him.

From vast forgotten underground cities to an elaborate and shocking double-cross, Tony Cliff's Delilah Dirk and the Pillars of Hercules brings all the drama and excitement that fans of the series crave.


Praise For Delilah Dirk and the Pillars of Hercules…

"Cliff's art is striking in both action scenes and in the choice of color palette, used to convey place, tone, and mood."—Kirkus

"Compelling writing combined with colorful illustrations makes this a book that is sure to delight." —School Library Journal

"Cliff has created an engaging and daring character that is equal parts Lara Croft and Indiana Jones." —Publishers Weekly

"Awesome two-page spreads capture the grandeur of their archaeological finds...Delilah’s no-nonsense demeanor and dry sense of humor make her a joy to follow..." —Booklist

"This fun, fast-paced graphic novel is a pleasurable read... Excellent illustration tells the story and covers much of the action quickly and succinctly." —VOYA

Tony Cliff is the New York Times Bestselling author of the critically-acclaimed Delilah Dirk series of adventure graphic novels. He has also written and illustrated Let's Get Sleepy, a seek-and-find children's story about cats, a mouse, and the value of a day well-lived. He lives in Vancouver, BC, is a veteran of that city's animation industry, and is a long-time Jordan, Jesse, Go! listener.
Loading...
or
Not Currently Available for Direct Purchase