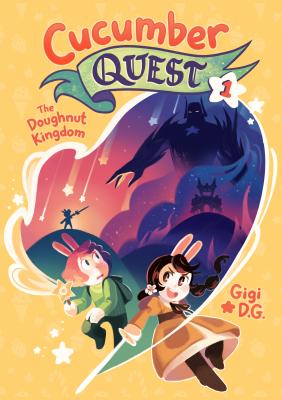 What happens when an evil queen gets her hands on an ancient force of destruction?

The seven kingdoms of Dreamside need a legendary hero. Instead, they'll have to settle for Cucumber, a nerdy magician who just wants to go to school. As destiny would have it, he and his way more heroic sister, Almond, must now seek the Dream Sword, the only weapon powerful enough to defeat Queen Cordelia’s Nightmare Knight.

Can these bunny siblings really save the world in its darkest hour?

Adapted from Gigi D.G.'s popular webcomic series, Cucumber Quest, The Doughnut Kingdom is the first graphic novel of a clever, adorable, and hilarious four-volume heroic adventure that is sure to make you hungry for sweets and action.

"[D.G's ]populated the world of Dreamside with characters who can be heart-warming and infuriating, but who are always fun to watch. Plus there’s the art, which features some of the finest color work I’ve seen in webcomics." —i09

"D.G.'s candy-colored charmer is imbued with a delightfully snarky humor, helping to offset the profusion of cuteness....The worldbuilding is cleverly conveyed in bright and dynamic illustrations." —Kirkus Reviews

"A blend of humor and adventure headed by some wackadoo characters—what’s not to like?" —The Bulletin of the Center for Children's Books