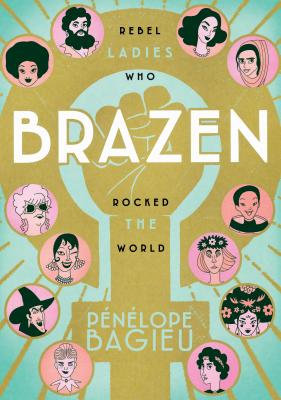 Rebel Ladies Who Rocked the World

Throughout history and across the globe, one characteristic connects the daring women of Brazen: their indomitable spirit.

With her characteristic wit and dazzling drawings, celebrated graphic novelist Pénélope Bagieu profiles the lives of these feisty female role models, some world famous, some little known. From Nellie Bly to Mae Jemison or Josephine Baker to Naziq al-Abid, the stories in this comic biography are sure to inspire the next generation of rebel ladies.


Praise For Brazen: Rebel Ladies Who Rocked the World…

"Bagieu’s pen transforms these true stories into something that has the tone of a personalized fairy tale. And in the end, this turns out to be just perfect."—The New York Times

"The highest praise I can give “Brazen” is that it belongs in most every girl’s — and boy’s — hands by middle school. The book reminds you that too many great women’s stories have been lost to history — and that for the greater good, that must never happen again."—The Washington Post

"Brazen: Rebel Ladies Who Rocked the World spans centuries across the globe, with Bagieu using her signature drawings to bring various women’s indomitable spirits to life... the stories in this comic biography, told through vivid vignettes, may just inspire the next generation of rebel ladies."—Entertainment Weekly

"The crisp, cartoony art is expressive and fun, and the short narratives will kick-start many a great presentation in social-studies class."—Vulture

"Bagieu's brand of feminism comes with frills and curlicues galore. Her voice is pert and saucy, and her cartoons are darling."—NPR

"...Parisian cartoonist Pénélope Bagieu [brings] us Brazen: Rebel Ladies Who Rocked the World!, a wonderful collection of comics based on some of the most incredible women who’ve changed history as we know it."—Nerdist

"Bagieu chooses 29 different women to give the comic spotlight to, and a major part of the book’s success is the variety of her subjects, representing a wide range of experiences that takes readers from Ancient Greece to seventh-century Japan to present-day Afghanistan."—AV Club


"We swooned over California Dreamin’, French cartoonist Pénélope Bagieu’s biography of the Mamas & the Papas singer Cass Elliot, and now Bagieu is back with a look at a wider array of influential women throughout history... Inventive, impressive cartooning." —Paste Magazine, from their "40 Most Anticipated Comics of 2018"

"From colonial Africa and 7th century China to suburban Long Island, crossing political and religious boundaries, Brazen offers up such a wealth of women and experiences that readers can’t help but identify with their struggles, dreams and accomplishments." —Comic Book Resources

"Any one of these stories would make a rousing picture book biography; 29 of them in one volume produces a work whose energy and wit will spur readers to get going and change the world." —Publishers Weekly, starred review

"Bagieu delivers a pièce de résistance that succinctly summarizes the obstacles and victories of these daring women. Insightful and clever, at times infuriating and disheartening, this serves as a reminder that the hardships women face today have been shared—and overcome—by many others." —Kirkus, starred review

"A strikingly original collective biography for casual readers, students, and those looking for inspiration in their own lives." —School Library Journal, starred review

"This dynamic paean to women’s flair for fierce resistance will have readers happily sifting through history—and tackling the future with renewed verve. Rock on, ladies." —Booklist, starred review


"This is an encouraging, uplifting book to highlight in any library’s women’s history collection. It will be an inspiration to many young adult readers and browsers." —VOYA, starred review


"Whether sparked by cathartic outrage, admiration, or simple bemusement, Bagieu lets her passion imbue her bios and crafts each entry into a portrait of a woman you absolutely must hang out with for a long weekend."—The Bulletin of the Center for Children’s Books starred review

Pénélope Bagieu was born in Paris in 1982, to Corsican and Basque parents. She is a bestselling graphic novel author and her editorial illustrations have appeared all over the French media. She blogs, drums in a rock band, and watches lots of nature shows. Her books with First Second include Exquisite Corpse and California Dreamin'.

Pénélope Bagieu was born in Paris in 1982, to Corsican and Basque parents. She is a bestselling graphic novel author and her editorial illustrations have appeared all over the French media. She blogs, drums in a rock band, and watches lots of nature shows. Her books with First Second include Exquisite Corpse and California Dreamin'.
Loading...
or support indie stores by buying on