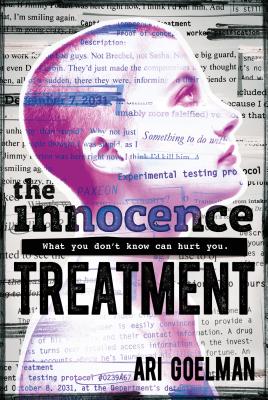 You may believe the government protects you, but only one girl knows how they use you.

Lauren has a disorder that makes her believe everything her friends tell her—and she believes everyone is her friend. Her innocence puts her at constant risk, so when she gets the opportunity to have an operation to correct her condition, she seizes it. But after the surgery, Lauren is changed. Is she a paranoid lunatic with violent tendencies? Or a clear-eyed observer of the world who does what needs to be done?

Told in journal entries and therapy session transcripts, Ari Goelman's The Innocence Treatment is a collection of Lauren's papers, annotated by her sister long after the events of the novel. A compelling YA debut thriller that is part speculative fiction and part shocking tell-all of genetic engineering and government secrets, Lauren's story is ultimately an electrifying, propulsive, and spine-tingling read.


Praise For The Innocence Treatment…

"Readers looking to jump into government conspiracies will find a fresh take with this teenager who gains the ability to fight back, rebel against authority, and expose government corruption." - VOYA

"...readers who enjoy the moral cartwheels of a nation flooded by fear and the chill of a troublingly plausible future punctuated by opportunistic and insidiously innovative scientists will find all the frissons they could ask for here. Nineteen Eighty-Four meets V for Vendetta in a thrilling package." - Kirkus

Ari Goelman is the award-winning author of novels for children and young adults. His debut novel, The Path of Names, won the Chocolate Lily Award (2014) and was shortlisted for the YA Sunburst Award (2014), the B.C. Book Prize Award (2014) and the Diamond Willow Award (2014). He has also published more than a dozen short stories in such publications as Strange Horizons, Talebones, and Daily Science Fiction. He is a past winner of the Writers of the Future competition, and a graduate of the Clarion West writers workshop.

Ari earned a Ph.D. from the Massachusetts Institute of Technology in Urban Studies. He has worked as a teacher, a writer, a researcher, an urban planner, a camp counselor, a stay-at-home father, and a host of other jobs. These days, in addition to writing fiction, he teaches research methods at Kwantlen Polytechnic University. He lives in Vancouver, Canada, with his family.