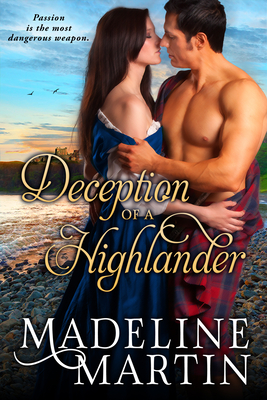 Deception of a Highlander (Heart of the Highlands #1)

A promising debut​.​--​PUBLISHERS WEEKLY​ Scottish Romance doesn't get much steamier--or more dangerous--than a spy hunting her quarry, and losing her heart to him instead. To pay a seemingly impossible debt, Mariel Brandon has become a spy for Aaron, one of England's deadliest minds. Aaron's latest mission for the sharp-witted and daring Mariel is to find two people in a heavily fortified castle on the Isle of Skye, a castle headed by the clan MacDonald and the powerful Kieran. Mariel is to seduce Kieran and get him to take her to Skye. If she succeeds, Aaron promises to let Mariel's young brother go, and to free both of them from their debt. If she fails, her brother will die. What she doesn't count on is craving Kieran MacDonald almost immediately upon meeting him. Now Mariel must keep a secret from Kieran--one that could get them both killed--as she tries to form a plan that will save her brother, get her out from under Aaron's thumb once and for all, and keep her in Kieran's strong arms forever.

Madeline Martin lives in Jacksonville, Florida with her two daughters and a menagerie of pets. She graduated from Flagler College with a degree in Business Administration and works for corporate America. Her hobbies include rock climbing, running, doing Mud Runs and just about anything exciting she can do without getting nauseous. She grew up in Europe and still enjoys traveling overseas whenever she can find the time to get away. Her favorite place to visit thus far: Scotland.
Loading...
or
Not Currently Available for Direct Purchase