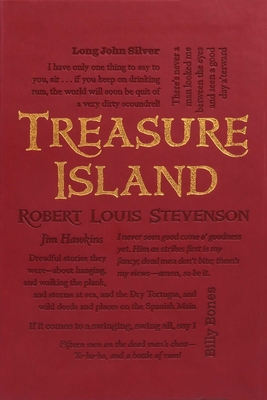 Perhaps the most iconic pirate story of all time, Treasure Island was written by Robert Louis Stevenson in 1881. The book follows young Jim Hawkins who finds himself in possession of a treasure map and embarks on a journey to unearth the pirate booty. His adventure takes him through the turbulent waters of morality, and his subsequent coming of age has captivated generations of readers.

Rousing and full of adventure, Stevenson’s Treasure Island is a classic to be enjoyed by readers of all ages. Now available as part of the Word Cloud Classics series, it makes a chic and affordable addition to any library.

Robert Louis Stevenson (1850–1894) was a well-respected Scottish writer. With a propensity toward imaginative thought and rebellious philosophies, Stevenson traveled throughout the world during his life, using his experiences in much of his writing. His two best-known stories, Treasure Island and Dr. Jekyll and Mr. Hyde, are classics of Western literature.
Loading...
or support indie stores by buying on
(This book is on backorder)