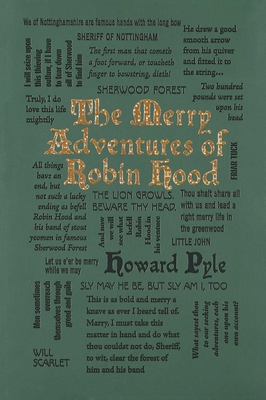 Don your Lincoln green and prepare for merriment!

What could be merrier than joining Robin Hood's band of Merry Men for adventures in the English countryside? Pirates of the trees rather than the seas, Little John, Friar Tuck, Will Scarlet, and many others ensure that Robin's clever schemes relieve the rich of their excess treasures and redistribute the wealth to those most in need. Howard Pyle was an accomplished author and illustrator; his original images, published with the stories in 1883, appear throughout the book. You will leave no leaf unturned in this latest addition to the Word Cloud Classics series.

The work of American illustrator and author Howard Pyle (1853–1911) has appeared in more than 3,500 publications, and in his lifetime, he became one of the country's most famous illustrators. On his death in 1911, the New York Times called Pyle "the father of American magazine illustration as it is known to-day." He is best known for his 1883 novel, The Merry Adventures of Robin Hood.
or support indie stores by buying on
Copyright © 2020 American Booksellers Association