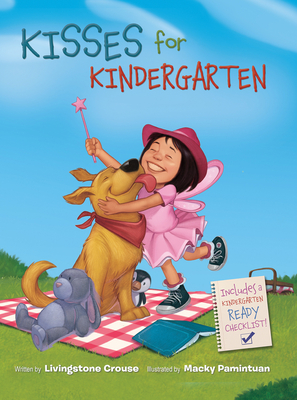 Join Stella Isabella Harden and her puppy Buster in this lyrical read-aloud and heartwarming story about the first day of kindergarten.

Stella Isabella Harden
contemplating kindergarten
declared she didn't have to go...
because her puppy told her so.

School is about to begin, and Stella Isabella Harden decides that kindergarten just isn't for her. Instead, she decides to spend the day learning from her puppy named Buster. Together these two adventurers plan a day full of playtime, teatime, nap time, and story time. After every "lesson," Stella gets the best reward: a kiss from her best friend and favorite puppy. But will she change her mind about kindergarten before the first day of school? Join Stella and Buster in this lyrical read-aloud and heartwarming story about growing up.

Macky Pamintuan was born and raised in Davao, a city in the southern Philippines. As a young child, drawing was his favorite pastime and an activity that brought him delight and satisfaction. Early on, his parents discovered that giving him paper and pencil was a sure way to keep him busy, quiet, and out of trouble. He still remembers the day when he successfully drew Mickey Mouse and Superman, a huge breakthrough and a sweet triumph. He moved to San Francisco at age 21 and in 1998 enrolled in the Academy of Art College to pursue illustration. He received his Bachelor of Fine Arts degree in December 2003. When not illustrating, Macky enjoys playing basketball, his other true passion.

Livingstone Crouse has spent the last twenty years either selling, editing, or writing books for children. He's even done all three at once! So recently he decided he'd focus entirely on writing the kinds of books he likes to read—books in verse that are filled with heart, word-play, and lots of laughs. Livingstone lives in a large, 200-year old farmhouse in New York's Hudson Valley with his husband and a dog named Kat. (And you can be fairly certain that Livingstone Crouse is not his real name. But don't tell anyone!)
or
Buy Here
Copyright © 2020 American Booksellers Association