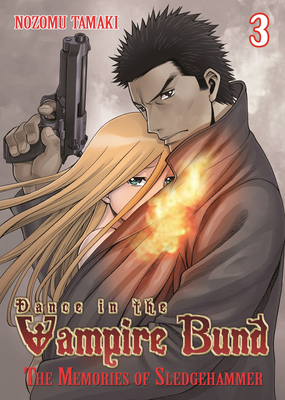 Dance in the Vampire Bund (Paperback)

The Memories of Sledge Hammer Vol. 3: Dive in the Vampire Bund

The conclusion to the three-volume series following the New York Times Bestseller Dance in the Vampire Bund!

Three months have passed since Princess Mina, queen of all vampires, has recaptured the Bund. The damage inflicted to vampire/human relations runs deep, but a peaceful postwar restoration is now underway.

Yet appearances can be deceiving. Somebody is trying to kill government liaison Reiko Gotoh, but her lycanthrope bodyguard, Seiji Hama, is nowhere to be found. The mystery of Hama's whereabouts can only be solved by examining the past, when the ill-fated couple first met. The past may be the key to saving Gotoh in the present—and to the future of the Vampire Bund itself!

Nozomu Tamaki is the stunning and original artist behind Dance in the Vampire Bund, Femme Kabuki, and Don't Meddle With My Daughter.

“A wicked addition to the vampire action gang.” —VAMPYRES ONLY