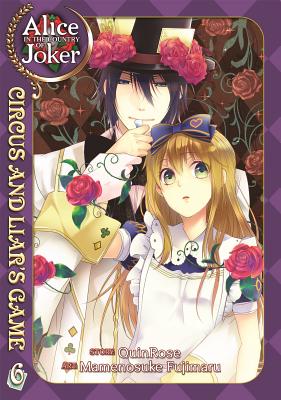 Alice in the Country of Joker, Volume 6

"I COULD LOCK HER AWAY AND MAKE HER MINE, IF I FELT LIKE IT. BUT THAT WOULDN'T FIX THE PROBLEM, WOULD IT?"

Alice may have chosen her suitor, but the specter of Joker looms over April Season, while her sister Lorina is still locked away. As Alice learns more of the truth behind the jail and the executioner, the other Role-Holders of Wonderland are making moves of their own and their actions, as always are steeped in blood. What will it take for Alice to finally face Joker and herself?

QuinRose is a Japanese game developer who created the Alice franchise of video games, which spun off into novels, manga, and an anime feature film. Mamenosuke Fujimaru is a Japanese manga artist best known for his work on Alice in the Country of Clover.
Loading...
or
Not Currently Available for Direct Purchase