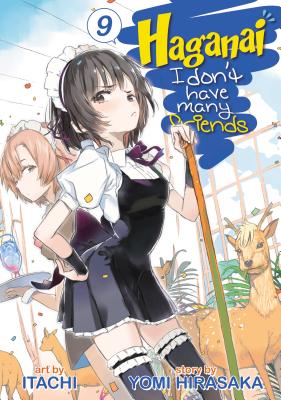 I Don't Have Many Friends Vol. 9

LIFE WITH THESE WACKOS IS ALWAYS A ROLLER COASTER RIDE!

The Neighbors Club may be a group of friendless misfits who can't get the hang of socializing despite their best efforts, but at least they have each other to practice on! Sena's continued attempts to make Kobato love her result in the entire club taking an outing to an amusement park, where they turn a death-defying roller coaster into a competition, while eating curry, and…getting kidnapped by demons?!

But there's more going on at the club these days than meets the eye. One of the girls has a surprise in store for everyone—including herself! And when Kodaka challenges Rika to make a truly impressive invention, the skeleton he and Yozora have been hiding may not stay in the closet for long!

Yomi Hirasaka is an author of light novels whose best-known work, Haganai: I Don't Have Many Friends, has been adapted into two hit manga series, an anime, and a live-action movie.

Itachi is a Japanese manga artist who is best known for Haganai: I Don't Have Many Friends.
or
Buy Here
(This book is on backorder)
Copyright © 2020 American Booksellers Association