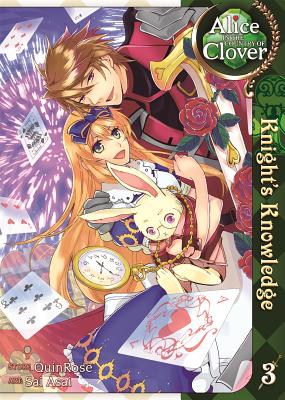 Alice in the Country of Clover

When Alice tries to juggle her relationship with Elliot and her increasingly passionate affair with Ace, trouble brews behind the scenes of the assembly. A group of mysterious Faceless have targeted Alice, and the Mad Hatter has been plotting something sinister of his own. In a violent clash for control, it may be those closest to Alice who are in the most danger. The ultimate test will fall on the shoulders of the role-holders of Heart Castle: the Queen, the White Rabbit, and their unpredictable Knight of Hearts.

Praise For Alice in the Country of Clover: Knight's Knowledge Vol. 3…

"It may be impossible to beat Lewis Carroll at his own game, but as Alice in the Country of Hearts shows, there are still ways to succeed." —ANIME NEWS NETWORK

QuinRose is a Japanese game developer who created the Alice franchise of video games, which spun off into novels, manga, and an anime feature film. Sai Asai is a Japanese manga artist best known for Alice in the Country of Clover: Knight's Knowledge.
Loading...
or
Not Currently Available for Direct Purchase