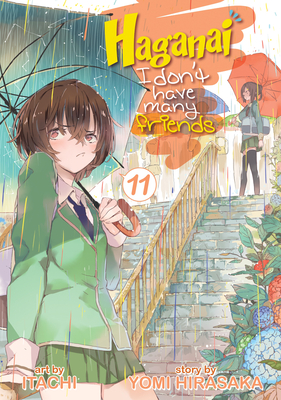 The Saint Chronica school festival is coming fast, and the Neighbors Club still hasn't figured out how to present themselves to the world. They're running out of time and ideas, but a solution may have presented itself, if only they can agree to disagree.

In order to make their idea a reality, the Neighbors Club will have to trust Yozora's talent as a writer-and her track record on that front is questionable. And while Yozora and Sena are known to squabble, their relationship is now more strained than ever. Have they crossed a point of no return? Is Yozora even capable of seeing the good in the present rather than dwelling on the past? Will the Neighbors Club spontaneously combust before we ever find out...?

Yomi Hirasaka is an author of light novels whose best-known work, Haganai: I Don't Have Many Friends, has been adapted into two hit manga series, an anime, and a live-action movie.

Itachi is a Japanese manga artist who is best known for Haganai: I Don't Have Many Friends.
Loading...
or support indie stores by buying on