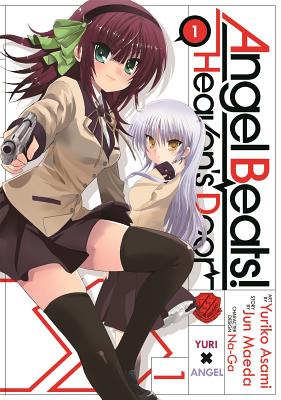 Angel Beats : Heaven's Door takes readers on a journey to a different sort of afterlife. Based on the hit anime, Angel Beats , this brand new manga series delves into the early years of the Angel Beats universe, as we learn the origin story of heroine Yuri, who assembles a motley crew of deserted souls in their fight against God. Angel Beats : Heaven's Door treats existing fans to events taking place before the story as told in the anime, while providing an entertaining point of entry for new readers.

Angel Beats : Heaven's Door is an ongoing manga series and will be released as single volume editions. Each book contains at least one full-color insert illustration. The original anime, Anime Beats , has been released in its entirety in English by Sentai Filmworks.

Hideki Hinata has just died...but his life is far from over. Finding himself stuck in a kind of purgatory in the Afterlife School-an academy for recently departed lost souls-he begins to learn that the land of the dead has just as many annoying rules, if not more, than the land of the living.

There he meets Yuri Nakamura, a brazen young woman who harbors nothing but contempt for God due to the life she was forced to lead before passing away. Together, Yuri and Hideki form the SSS brigade, otherwise known as the Afterlife Battlefront-a group whose purpose it is to rebel against God in any way they can. However, standing in their way is the stoic and cold Tenshi, a supposed angelic messenger of God...who just so happens to be the Student Council President

Can Yuri and the rest of the Afterlife Battlefront overcome their fate or are they destined to be stuck in a limbo world forever?

Jun Maeda is a Japanese author best known as the creator of the Angel Beats franchise, as well as several popular light novels including Air, CLANNAD, and Kanon.Yuriko Asami is a Japanese manga artist best known for her work on the Angel Beat!: Heaven's Door series.
or
Not Currently Available for Direct Purchase