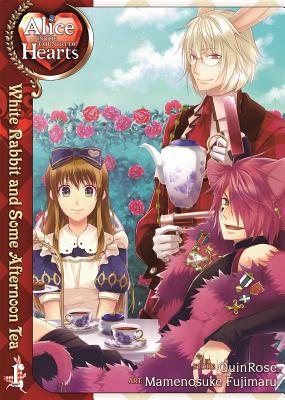 Alice in the Country of Hearts

THE TALE OF PETER RABBIT

It all began on a fateful Sunday afternoon while Alice was in the garden with her sister or did it? Alice doesn t know why a white rabbit whisked her off to a land full of wonders, but the lines of reality have blurred, and she thinks she's in a dream. It must be, since the white rabbit is a handsome man who's confessed his undying love for her, and his whimsical Country of Hearts is surprisingly vicious. But when faced with this strange rabbit and the depth of his feelings for her, Alice starts to wonder how she could possibly dream up a love so deep because it's more profound than anything she's ever known. At long last, the story of Peter White

QuinRose is a Japanese game developer who created the Alice franchise of video games, which spun off into novels, manga, and an anime feature film.Mamenosuke Fujimaru is a Japanese manga artist known best known for Alice in the Country of Clover: Cheshire Cat Waltz.
Loading...
or
Not Currently Available for Direct Purchase