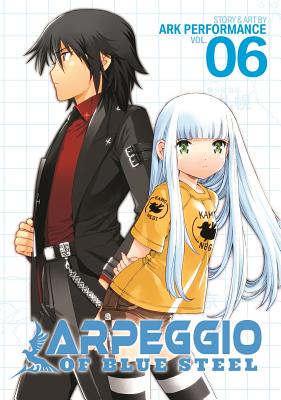 An all-new science fiction manga epic about how the fate of humanity against alien invaders lies in the hands of one unique girl... and an unstoppable military weapon

Alliances and subterfuge are the order of the day! Japan’s military, anxious to prevent the the sentient submarine 401 from leaving for the United States, takes desperate action. What they haven’t banked on is Gunzou and his crew getting help from two Fog ships: Hyuga, who’s kept the 401 in good repair and maintained the crew’s base of operations, and the opportunistic Takao, who’s allied herself with them in pursuit of her own goals.

On the other side of the world, Gunzou’s father-the 401 ’s former captain, Chihaya Shouzou–supported by the Musashi and other likeminded Fog vessels, announces a new approach for making Earth’s oceans once again safe for humanity and Fog alike, but under his authority. Gunzou has plans of his own for bringing peace to the world, if only Japan can be persuaded to go along with them…

Ark Performance is a Japanese author/artist duo responsible for Arpeggio of Blue Steel with Seven Seas, as well as the series Samurai Commando; they are also a contributor to the Trigun: Multiple Bullets anthology.
Loading...
or
Not Currently Available for Direct Purchase