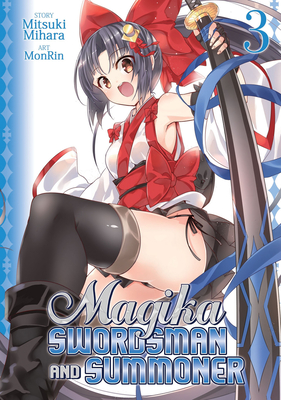 Magika Swordsman and Summoner is a fantasy manga series about a young magical summoner and his trials and tribulations in summoner school, based upon a popular light novel series.

Kazuki Hayashizaki, the only boy in the all-girls’ Magika, is starting to accept his fate as a summoner rather than a swordsman. But after a decisive victory in the dueling arena, the teachers believe that Kazuki’s rightful place is at the Kengika, the school for training swordsmen. No one feels this more strongly than Kazuki’s adoptive sister, Kanae, who challenges him to a duel that would pit her sword skills against his summoning magic. If Kazuki wins, it will prove once and for all that he has what it takes to become a summoner and should remain at the Magika. There’s only one hitch—Kazuki’s spells are mysteriously running dry, and time is running out!

MonRin is a Japanese artist best known for Magika Swordsman and Summoner.
Loading...
or support indie stores by buying on
(This book is on backorder)