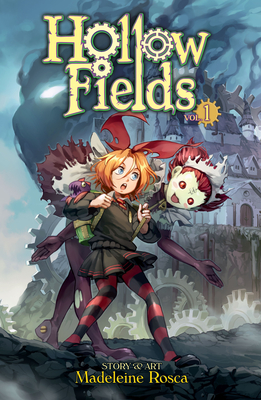 A full-color revisit to the critically acclaimed steampunk hit!

Little Lucy Snow was supposed to attend a prestigious boarding school; however, a macabre twist of fate finds her enrolled instead at Miss Weaver’s Academy for the Scientifically Gifted and Ethically Unfettered, also known as Hollow Fields. Located on the outskirts of Nullsville and run by the insidious Engineers, the grim boarding school dedicates itself to raising the next generation of mad scientists and evil geniuses!

Classes include Live Taxidermy, Cross-Species Body Part Transplantation, and Killer Robot Construction. For her own survival, Lucy must master her lessons quickly. At the end of each week, the student with the lowest grades is sent to the old windmill for detention...and so far, no child has ever returned.

MADELEINE ROSCA debuted as a manga creator in 2007 with her three volume series Hollow Fields which won an encouragement award from Japan's Foreign Ministry for Best International Manga and was nominated for best Graphic Novel in the Aurealis Awards for Australian Science Fiction and Fantasy. Rosca was nominated for a Best New Talent award by Friends of Lulu. She lives and works in Hobart, Tasmania with her husband and cat.