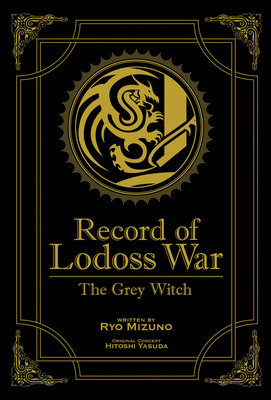 One of the most beloved and iconic fantasy novels of all time returns to print in a brand new hardcover, gold trim edition!

Thirty years after the Demon Wars, peace has returned to the land of Lodoss–but darkness looms. After defending his village against a horde of goblins, a headstrong young warrior named Parn sets out on a quest to restore his father’s honor and save the realm. Joining Parn are Deedlit the high elf, Slayn the wizard, Etoh, a fledgling priest, Ghim, a grizzled dwarven warrior, and Woodchuck, a wily thief. Along their journey, Parn and his companions discover an evil witch who, for eons, has been manipulating events from the shadows. Can this ragtag party of heroes defeat the all-powerful Grey Witch and prevent Lodoss and its kingdoms from descending into total chaos and destruction?

Ryo Mizuno is a Japanese author and game designer best known for creating Record of Lodoss War and Rune Soldier.

Yutaka Izubuchi is an artist and concept designer best known for their work on Record of Lodoss War, Mobile Suit Gundam, and Escaflowne.

"To claim your work to be an 'epic fantasy masterpiece' is quite bold, considering the wealth of fantasy novels that can equally lay claim to that title - and yet Ryo Mizuno's Record of Lodoss War series of novels can not only lay claim to just that, but can also be credited as being the pioneer of not only the fantasy genre in Japanese anime and manga, but also being one of the first series to be published in the - then new - light novel format..."
--Russell Phillips, UK Anime Network

"...an enjoyable read. Neither too dark nor too fluffy, Ryo Mizuno's first fantasy should appeal to both readers familiar with the franchise and those who are not."
--Rebecca Silverman, Anime News Network