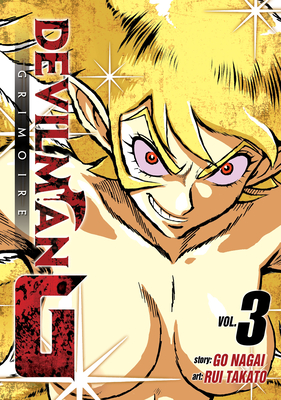 DEATH TO THE TRAITOR!

The time of demonkind’s full revival draws ever closer, as more and more humans succumb to possession. Against them stands only the traitor Amon, in the body of human Fudo Akira. His deeds have not gone unnoticed. Lord Atrocious, the Monster Shogun–strongest of demonkind–demands Amon’s head! The strongest demons from across the world descend upon Japan, seeking Akira’s life, even Lord Satan himself! It’s one demon against the world–but Amon won’t hesitate to kill anyone who stands in his way.

Rui Takatou is a Japanese manga artist who works in a variety of genres. He is currently best known for his work on the recently completed Devilman Grimoire.

“[...] a horror/superhero fusion, about a boy whose secret identity is that of a brawny muscled devil-creature. In the TV series, Devilman is basically a hero who fights a different monster in every episode. But the manga version was something much more original, much more crazy, much more Nagai.” —Jason Thompson, Anime News Network

"...the art is very reminiscent of the original series without being a slave to recreating the 1970s, forming a nice mix of styles. Seven Seas' representative commented that this was a good entry to the Devilman franchise, and I'm inclined to agree with him – not only did the book leave me wanting volume two, but also curious to check out the original." —Rebecca Silverman, Anime News Network