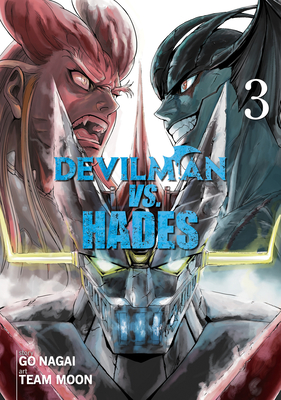 THE CLASH OF DEVIL AND MACHINE!

Fudo Akira battled across the broken face of the world to stand against Hades, Emperor of Darkness–and now he finds himself turned into a pawn. Hades strikes a devil’s bargain: If Akira destroys his greatest foe, the giant fighting machine Great Mazinger, he will restore Akira’s beloved and the world itself to life! It’s a battle across time and space for the fate of one man’s love–and the future of all mankind.


Praise For Devilman VS. Hades Vol. 3…

“...A horror/superhero fusion, about a boy whose secret identity is that of a brawny muscled devil-creature. In the TV series, Devilman is basically a hero who fights a different monster in every episode. But the manga version was something much more original, much more crazy, much more Nagai.” --Jason Thompson, Anime News Network

Team Moon is a Japanese manga group best known for Devilman in Hell.
Loading...
or
Not Currently Available for Direct Purchase