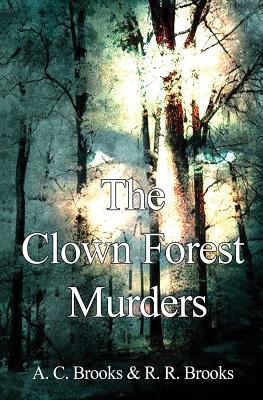 Did clown-colored mushrooms spark the gruesome murders? Will his memories of the murders save him or kill him?

At age eight, Dave Austin witnesses his brother's savage murder in rural Norwich, New York, but amnesia suppresses the memory, and the killer escapes. Locals suspect an itinerant, a pedophile, or a disturbed friend maddened by psychedelic mushrooms. When Dave starts college, pressures at Princeton and alcohol elicit dreams, each one revealing a bit of memory. Then come visions as Dave senses the killer return. Images of teenagers killed where his brother died precipitate a crisis, and David returns to Norwich to find his dead brother's friend, a disturbed witness who knows something. Dave's appearance alarms his psychiatrist, the officers who hadn't solved the case, and especially the killer, who knows he should not have let the young Dave escape. Now the killer must correct his mistake. When a crazy farmer invites Dave to learn the killer's name in the Clown Forest at midnight, how can he resist? He may learn what he needs to identify the murderer--if he gets the truth, and survives.