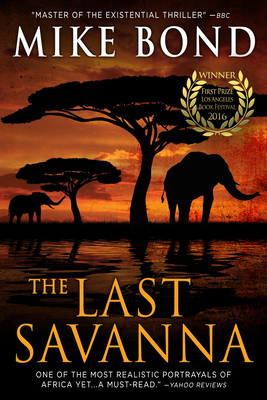 As ivory poachers are gunning down Africa's last elephants, former SAS officer Ian MacAdam leads a commando squad against them. He pursues the
poachers through jungled mountains and searing deserts, only to find they have kidnapped a young archaeologist, Rebecca Hecht, whom he once loved
and bitterly lost.
He embarks on a desperate trek to save not only Rebecca but his own soul in an Africa torn apart by wars, overpopulation and the slaughter of its last wildlife.
Based on the author's own experiences pursuing elephant poachers in the wilds of East Africa, The Last Savanna is an intense personal memoir of humanity's
ancient heartland, the beauty of its perilous deserts, jungles, and savannas, and the deep, abiding power of love. "The central figure is not human; it is the barren, terrifying landscape of Northern Kenya and the deadly creatures who inhabit it." --Daily Telegraph

Bestselling author, advisor to the US and foreign governments, human rights and war correspondent, award-winning poet and international energy expert,

Mike Bond has lived and worked in over thirty countries on six continents. His works have been translated into several languages and have been praised by critics on both sides of the Atlantic for their intricate plots, fascinating

characters, extraordinary settings, and explosive pace. Based on his own experiences in dangerous, remote, and war-torn regions, his novels look deeply into the dark side of man as well as the good. They mix

the terror and fury of battle and the intense joy of love, the vanishing beauty of the natural world, and the nature of the universe and its many meanings for

human life. His lean unsentimental raw prose, free of best-seller formulas and literary pretension, conveys through the lives of real people what it means

to be deeply alive, to hunger for a better world. Dealing with political truths few else discuss, Mike Bond's writings have been widely quoted by military experts, intelligence analysts, and political thinkers.

How do we live, his books ask, at the deepest level? How does evil masquerade as good? What are politics, government, and intelligence behind their many

masks? The secrets behind international deals, dirty wars, assassinations, and coups? How does one lead a good life and care for others in a world of danger

and evil?
Loading...
or
Not Currently Available for Direct Purchase