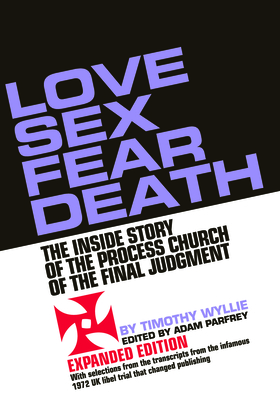 The Process Church of the Final Judgment was the apocalyptic shadow side of the flower-powered '60s and perhaps the most notorious cult of modern times. Love, Sex, Fear, Death is the shocking, surprising, and secretive inside story of The Process Church, which was later transformed into Foundation Faith of the Millennium, and most recently as the Utah-based animal sanctuary, Best Friends.
Hundreds of black-cloaked devotees, often wearing a satanic "Goat of Mendes" and a stylized mandala, swept the streets of London, New York, Boston, Chicago, New Orleans, and Toronto, selling magazines and books with titles like Fear and Humanity is the Devil. And within the group's "Chapters," members would participate in "Midnight Meditations" beneath photographs of the Christ-like leader.
Process' "Death Issue" interviewed the freshly-imprisoned Charles Manson leading to conspiracy hysteria in such books as Ed Sanders' The Family and Maury Terry's The Ultimate Evil. A lawsuit against Sanders' Manson book led to the removal of its Process-themed chapter by publisher Dutton.
A short narrative history by Timothy Wyllie, a formative member of the Process and Foundation Faith organizations, interviews with other former Processeans, never-before-seen photographs
New to this edition will be select court transcripts from the 1972 suit where the Process Church sued Ed Sanders for libel in England (and won.) The expanded edition also features a new introduction and update about the Process Church and key contributors to the Church and its history.