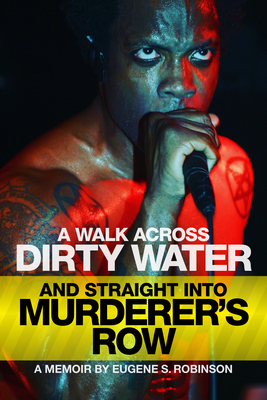 A Walk Across Dirty Water and Straight Into Murderer's Row

A rollicking no-holds barred memoir from journalist and musician Eugene S. Robinson that takes readers along through the story of his life.
"A weird rollicking ride" frames how author Eugene S. Robinson views his journey from a Brooklyn kid with decidedly offbeat punk rock proclivities to the realities of California hardcore and dark detours into shows, tours, drugs, porn, guns, MMA fighting, an Ivy League-esque education and his eventual entry into the US Defense industry just in time to see his boss dragged into Contragate.
Robinson's writing mirrors his fighting style intensity, ferocity, and brutal truth. He knows exactly who he is and how he is perceived by the white people and white culture that surrounds him. Robinson challenges accepted norms. He fights against easy answers and safe passages. He says:
"No one who ever gets a life sentence for just about anything really expects it to last a lifetime. Even if the modifier is "without the possibility of parole." Hope springs eternal but there's always the undiscussed other option. The one where the fate is chosen, freely, and the protagonist has about as much interest in escaping as he does of being almost anywhere else at all. Which is to say: not at all."
A Walk Across Dirty Water is Robinson's memoir of growing up in Brooklyn during the 1970s, playing in punk bands and touring the world during the eighties, taking a break to attend Stanford, and accidentally becoming a famous television personality in Germany.