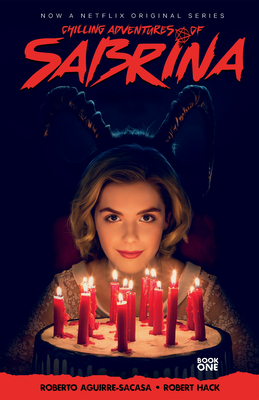 Now a hit Netflix series! On the eve of her sixteenth birthday, the young sorceress Sabrina Spellman finds herself at a crossroads, having to choose between an unearthly destiny and her mortal boyfriend, Harvey. But a foe from her family's past has arrived in Greendale, Madame Satan, and she has her own deadly agenda. Archie Comics' latest horror sensation starts here! For TEEN+ readers.

Praise For Chilling Adventures of Sabrina…

"It's supernatural suspense at its best, and of course Robert Hack's wonderfully creepy art is a perfect match." -- io9

“Another brilliant addition to the Archie Horror label.” --  SCREAM MAGAZINE

“Bloody, atmospheric, and unnerving, Sabrina has it all for horror fans.” --  UPROXX

"Blends bobbysocks and sacrifices, school plays and immortal witchcraft, in ways that are both chilling and relatable." -- TEEN VOGUE

"Aguirre-Sacasa and Hack's reimagination of Sabrina as a mix of Lovecraftian horror and '50s teen drama fits the bill." — COMICS ALLIANCE

"A must-read for horror fans and old-time fans of the character." — BLASTR

"A welcome return for Chilling Adventures of Sabrina and one that packs a serious punch." — HORROR TALK

"A masterful understanding of both character and atmosphere." — PANELS

ROBERTO AGUIRRE-SACASA is an award-winning playwright, screenwriter, and comic book writer. In television, he was a writer on the HBO series BIG LOVE for three years, and is currently a writer/producer on GLEE. For Marvel Comics, he has written SPIDER-MAN, NIGHTCRAWLER, THE FANTASTIC FOUR (winning a Harvey Award for MK 4), and many others, and also adapted Stephen King's epic novel THE STAND into a best-selling 30-issue series. His accomplishments in the theater world include over fifteen plays produced around the world; on Broadway, he was part of the team brought on to revamp SPIDER-MAN: TURN OFF THE DARK. For film, he has written the new 2013 CARRIE, based on the Brian DePalma classic, and a remake of the cult classic THE TOWN THAT DREADED SUNDOWN, both for MGM. For Warner Brothers, he has written a new version of the horror musical LITTLE SHOP OF HORRORS and the live-action adaptation of ARCHIE.
Loading...
or support indie stores by buying on