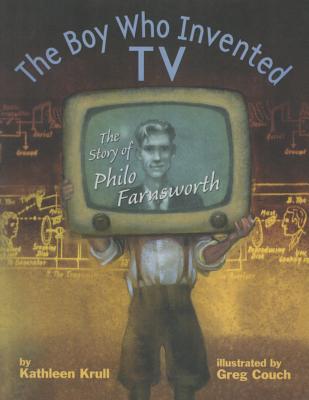 "An inspiring true story of a boy genius.
"Plowing a potato field in 1920, a 14-year-old farm boy from Idaho saw in the parallel rows of overturned earth a way to make pictures fly through the air. This boy was not a magician; he was a scientific genius and just eight years later he made his brainstorm in the potato field a reality by transmitting the world's first television image. This fascinating picture-book biography of Philo Farnsworth covers his early interest in machines and electricity, leading up to how he put it all together in one of the greatest inventions of the 20th century. The author's afterword discusses the lawsuit Farnsworth waged and won against RCA when his high school science teacher testified that Philo's invention of television was years before RCA's.

Greg Couch is the illustrator of "Nothing but Trouble: The Story of Althea Gibson "and many other picture books. He lives in Nyack, New York.
Loading...
or
Not Currently Available for Direct Purchase