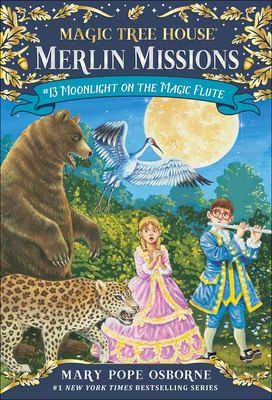 The bestselling, fan-favorite chapter-book series celebrates the magic of music
Jack and Annie have once again traveled back in time in their magic tree house, but they have a brand-new mission: to help bring happiness to "millions" of people.
Their mission takes them to eighteenth-century Austria, where they're decked out in their craziest outfits yet--including a wig for Jack and a long dress with lots of ruffles and bows for Annie But it will take more than the right clothing to help them fit in at a party at one of the most marvelous palaces in Europe . . . especially when all the animals in the palace zoo escape from their cages.
Can Jack and Annie save the day "and" complete their challenging mission? Find out in a story packed to the margins with history, mystery, and magic
First published in hardcover in 2009, Jack and Annie's most melodious adventure is now available in paperback. And--only in the paperback edition--the book now includes a musical activity, a fun puzzle, and a preview of the next book in the series.
Magic Tree House books are "New York Times" bestsellers. They are known all around the world as books that inspire reading. Find out why with "Moonlight on the Magic Flute

MARY POPE OSBORNE is the author of the "New York Times" number one bestselling Magic Tree House series. She and her husband, writer Will Osborne (author of "Magic Tree House: The Musical"), live in northwestern Connecticut with their three dogs. Ms. Osborne is also the coauthor of the companion Magic Tree House Fact Trackers series with Will, and with her sister, Natalie Pope Boyce.

SAL MURDOCCA has illustrated more than 200 children's trade and text books. He is also a librettist for children's opera, a video artist, an avid runner, hiker, and bicyclist, and a teacher of children's illustration at the Parsons School of Design. Sal lives and works in New York with his wife, Nancy.
Loading...
or
Not Currently Available for Direct Purchase