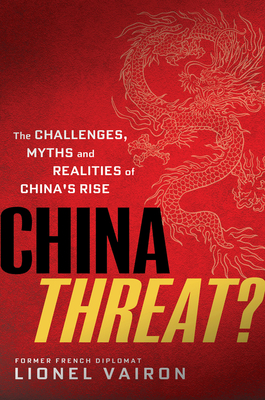 The Challenges, Myths and Realities of China's Rise

From the long-term threat of nuclear war between the United States and China, to the disappearance of the African elephant due to Chinese demand for ivory, each week brings a new round of critique and denunciation of the risks China poses to the stability of the entire planet. While critics raise a certain number of fundamental questions that bear asking about this nascent superpower, the answers put forth are usually based on ideological or economic considerations. Lionel Vairon systematically challenges these views in this updated edition of China Threat?

With an incisive review of China’s economic strategy, deployment of resources, national defense, political reform, ethnicity and religion, terrorism, and developments in human rights, Vairon amply demonstrates that China poses no threat to the world. On the contrary, China Threat? shows that China’s peaceful rise should be a matter of positive news across the globe.

Dr. Lionel Vairon, CEO of CEC Consulting, holds a PhD in Vietnamese Studies, and master's degrees in Chinese language and culture and in Political Science. He taught at the Institut National des Langues et Civilisations Orientales (INALCO), Hautes Études Commerciales de Paris (HEC Paris), and the Collège Interarmées de Défense. He is also a lecturer in the Institut des Hautes Études de Défense Nationale (France) and the China Executive Leadership Academy Pudong. Vairon has worked as a journalist and editor, and served as a diplomat for 16 years, particularly in Cambodia, Thailand and Iraq, and was then assigned for five years at the French Ministry of Defense as expert in the North Africa and Middle East department.