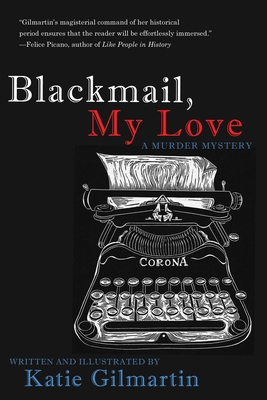 Josie O'Conner travels to San Francisco in 1951 to locate her gay brother, a private eye investigating a blackmail ring targeting lesbians and gay men. Jimmy's friends claim that just before he disappeared he became a rat, informing the cops on the bar community. Josie adopts Jimmy's trousers and wingtips, to clear his name, halt the blackmailers, and exact justice for too many queer corpses. Along the way she rubs shoulders with a sultry chanteuse running a dyke tavern called Pandora's Box, gets intimate with a red-headed madam operating a brothel from the Police Personnel Department, and conspires with the star of Finocchio's, a dive so disreputable it's off limits to servicemen -- so every man in uniform pays a visit.

Blackmail, My Love is an illustrated murder mystery deeply steeped in San Francisco's queer history, as established academic and first-time novelist Katie Gilmartin's diverse set of characters negotiate the risks of same-sex desire in a dangerous era. Set in such legendary locations as the Black Cat Cafe, the Fillmore, the Beat movement's North Beach, and the Tenderloin, Blackmail, My Love is a singular, stunning introduction to a new author and to gay noir.

Katie Gilmartin received a Ph.D. in cultural studies from Yale, with an emphasis in queer history. After teaching the history of sexuality and queer studies for a decade at the University of California, Santa Cruz, the University of California, Berkeley, and The New College, she became a printmaker. Her prior publications are academic essays based on interviews she conducted with lesbians about their lives in the 1940s and 1950s. This is her first work of fiction. Gilmartin lives in San Francisco.
Loading...
or support indie stores by buying on
(This book is on backorder)