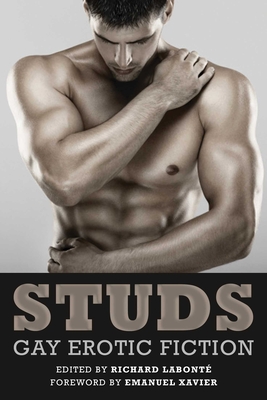 Rough and surly, smooth and sultry, or quick and raw -- however you like it, you'll find it in Studs, 20 of the hottest and best-written man-to-man sex stories to appear in print this year. In "Underground Operator" two men on a nearly empty subway platform indulge in rough, anonymous sex that lets them momentarily forget the stifling summer heat. "Donuts to Demons" finds a self-described "rock-n-roll artfag" searching for a lover "as patient and gifted and generous as he advertised on Craigslist."

"These are some of the hottest stories that I have read in a long time." --Reviews by Amos Lassen
— Reviews

Richard Labonté edits books, walks dogs and works as a chef's assistant at an addiction recovery center on Bowen Island, off the coast of British Columbia, Canada, after living in Los Angeles and San Francisco from 1979 to 2001. One of the founders of A Different Light Bookstore, he has coordinated the judging for the Lambda Literary Award since 2009. He reviews 100 queer books a year for Q Syndicate, which distributes "Book Marks," his fortnightly column and has edited the Best Gay Erotica series since 1996 (along with a couple of dozen other books for Cleis). Eight of his books, including five editions of Best Gay Erotica, have been Lammy finalists, and three of them have won the award.
Loading...
or
Not Currently Available for Direct Purchase