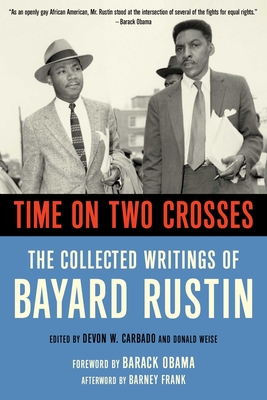 The Collected Writings of Bayard Rustin

Long before the March on Washington, Rustin's leadership placed him at the vanguard of social protest. His gay identity, however, became a point of contention with the movement, with the controversy embroiling even King himself.

Time on Two Crosses offers an insider's view of many of the defining political moments of our time. From Gandhi's impact on African Americans, white supremacists in Congress, and the assassination of Malcolm X to Rustin's never-before-published essays on Louis Farrakhan, affirmative action, and the call for gay rights, Time on Two Crosses chronicles five decades of Rustin's commitment to justice and equality.

Devon W. Carbado is a professor of law and African American studies at UCLA. He is the editor of "Black Men on Race, Gender and Sexuality" and coedtior of the Lambda Literary Award finalist "Black Like Us: A Century of Lesbian, Gay, and Bisexual African American Fiction," which was also nominated for a 2003 ALA Award. He lives in Los Angeles.Donald Weise is a coeditor of Black Like Us and The Huey P. Newton Reader. He lives in New York City.Barack Obama was elected President of the United States on November 4, 2008. He is the author of the New York Times bestsellers Dreams from My Father and The Audacity of Hope: Thoughts on Reclaiming the American Dream.Barney Frank served as a member of the U.S. House of Representatives from Massachusetts from 1981 to 2013, and is the former chairman of the House of Financial Services Committee. He is considered one of the most prominent gay politicians of the United States, and has played a key role in historical legislation, from LGBT civil rights to the landmark Dodd-Frank Wall Street Reform and Consumer Protection Act. He lives in Boston, MA.
Loading...
or support indie stores by buying on