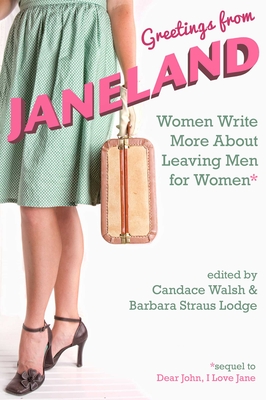 In an increasingly common phenomenon, women who once identified as straight are leaving men for women--and they have fascinating stories to tell.

In this sequel to Lambda Literary Finalist Dear John, I Love Jane: Women Write About Leaving Men for Women, writers who come from a diverse array of perspectives open up and bare their souls. Essays on subjects such as repercussions, both bad and good; exes, both furious and supportive; bewildered and loyal family and friends; mind-blowing sexual and emotional awakenings; falling in the deepest of love; and finding a sense of community fill the pages of this anthology. One story is as different from the next as one person is from another.

With a foreword by AfterEllen and GO! Magazine editor Trish Bendix, and essays by acclaimed writers including BK Loren, Louise A. Blum, and Leah Lax, relax, sit back and take a journey into Janeland--a very special place where women search for, discover, and live their own personal truths.

Praise For Greetings from Janeland: Women Write More About Leaving Men for Women…

"These incredible writers describe love's heartaches and passions in the no-holds-barred language of women's desire. These stories are both singular and universal, and are poised to transform the world." --Karen McClintock, My Father's Closet
— Karen McClintock

"This collection of brave, beautiful stories is an engaging, important lifeline for women who are taking on whatever life throws at them in order to live more authentically and passionately." --Samantha Waltz, Blended: Writers on the Stepfamily Experience
— Samantha Waltz

"A moving, revealing, and often funny exploration of women who love women, and a reminder that whether love makes us glow with joy or ache with rejection, we still want more." --Victoria Zackheim, writer, editor, best-selling anthologist
— Victoria Zackheim

"Greetings from Janeland, like its predecessor, is full of wonderfully affirmative stories for any queer woman who's felt at odds with typical definitions of queer sexuality or coming out narratives." -- Autostraddle
— Autostraddle

"The entire collection of Greetings from Janeland is exceptional and is so wonderfully done that once you start reading it you won't be able to put it down. I would recommend this book to anyone, regardless of their sexual identity, and believe that it is an important work that shows how no matter what your journey, you will eventually find yourself." --Katherine, www.thenerdygirlexpress, December 13, 2017
— Katherine

"Each essay gives the reader a different glimpse into the agony and joy of a woman discovering and accepting her own desire." --Rebecca Snow, Plenitude Magazine
— Rebecca Snow

"A great resource for women considering leaving a man to pursue a more authentic life. . . thoroughly enjoyable for anyone interested in later-in-life coming out stories." --GLBT Reviews
— GBLT Reviews

Candace Walsh is the author of Licking the Spoon: A Memoir of Food, Family, and Identity, a New Mexico-Arizona Book Awards winner and the editor of Dear John, I Love Jane, and Ask Me About My Divorce. Her writing has appeared in numerous national and local publications, including Newsday, Travel + Leisure, Sunset, Mademoiselle, New York magazine, and New Mexico Magazine. Her essays have been published in the anthologies Here Come the Brides!, Reflections on Lesbian Love and Marriage, Blended, and Spent, and she is currently editor in chief of El Palacio Magazine. She lives in Santa Fe with her wife Laura André, their two children, and two dogs.Barbara Straus Lodge is an essayist whose work has appeared in the New York Times Motherlode blog and the "LA Affairs" section of the Los Angeles Times. An essay under her pseudonym, Leigh Stuart, was published in the anthology Dear John, I Love Jane. Her work has also appeared in Parabola Magazine, The Rumpus, Literary Mama, and a variety of anthologies.
Loading...
or
Not Currently Available for Direct Purchase