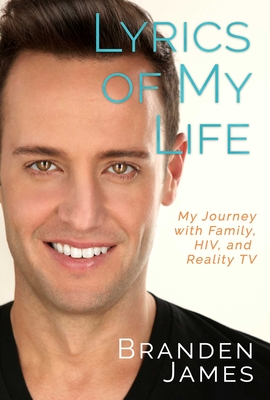 Lyrics of My Life (Paperback)

My Journey with Family, HIV, and Reality TV

The world was not the least bit surprised when Branden James became a finalist on Season 8 of America’s Got Talent, receiving high praise from the judges for his emotional, operatic vocals. During his time in the spotlight, hit a more than one perfect chord. Coming out and sharing intimate details of his broken ties with his religious family on the show, he received countless messages from fans who could relate to his personal struggles.

Through it all Branden was surprised by one startling realization: how vital it was for him to be completely authentic about whom he is in order to help others and continue to heal himself. Branden continued to inspire his fans and kindred spirits by publically sharing further stories of his struggles with depression, the tumultuous time when he contracted HIV, and suffering from sexual abuse while in school all while still identifying with the Christian faith.

Lyrics of My Life is authentically Branden: a memoir highlighting the conflicts of growing up gay in a world that looked upon his true self and beliefs as an impractical, sinful way of life. While seeking solace in his passion for music, Branden spares no details about his unstable life as a young adult, estrangement from his close-knit family, and, despite it all, his unbreakable will to overcome adversity. In a quest for his own personal freedom, Branden finds reconciliation with his family, rediscovers his faith, and realizes that affliction and hardship are not what define us as human beings.

Branden James first captivated millions as a finalist on the 2013 season of America's Got Talent. Since then, he has toured with The Twelve Tenors—personally performing for Pope Benedict XVI and The Mandela Family in South Africa. Branden has also performed at The Metropolitan Opera, Los Angeles Opera, and Lyric Opera of Chicago. He tours internationally in a cello and vocal duo called Branden & James with his husband, Australian cellist, James Clark. Visit him at brandenjames.com.

Praise For Lyrics of My Life: My Journey with Family, HIV, and Reality TV…

"Branden’s book is needed for these times. Being true to our soul and living with courage is required for survival, and his moving story will certainly inspire others, as it has deeply inspired me.” — Michael Feinstein, Grammy and Emmy-nominated singer, pianist, and music revivalist
— Michael Feinstein
or support indie stores by buying on
Copyright © 2020 American Booksellers Association