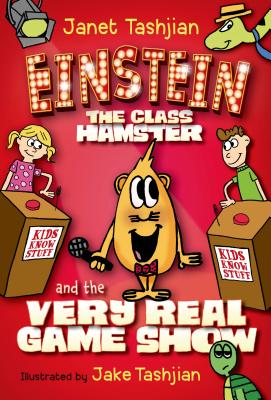 In Einstein the Class Hamster and the Very Real Game Show, the companion to Janet and Jake Tashjian's Einstein the Class Hamster, we follow Ms. Moreno's class as they face off against the students of Crackerjack Elementary on the hit game show Kids Know Stuff. But when Principal Decker sneaks Twinkles the python into the studio, there's widespread panic; the show's host is afraid of snakes and walks off the set. Now is Einstein's chance to shine! With the assistance of a sound engineer who can also hear Einstein, Ned and Marlon help Einstein get ready to host the show and save the day. But something goes wrong. Does Einstein have . . . STAGE FRIGHT? Oh no! Ned and Marlon must find a way to help Einstein and win the game show.

“Cute, pop-eyed cartoon illustrations add to the book's sense of silliness . . . This early chapter book contains an enticing mix of information and fun that is sure to please.” —Booklist

“Jake Tashjian's manic, kid-scrawled spot illustrations have an energy that matches Einstein's, and there's an abundance of humor (generally goofy or gross-out) in both his artwork and in Janet Tashjian's writing.” —Publishers Weekly

“Give this to kids who think they don't like reading. It might change their minds.” —Booklist, starred review on 'My Life as a Book'

“A kinder, gentler Wimpy Kid with all the fun and more plot.” —Kirkus Reviews, starred review on 'My Life as a Book'

“Sure to engage fans of Jeff Kinney's 'Diary of a Wimpy Kid' books as well as those looking for a spunky, contemporary boy with a mystery to solve.” —School Library Journal on 'My Life as a Book'

“Another fun, emotionally resonant read for the Wimpy Kid set and beyond.” —Kirkus Reviews, starred review on 'My Life as a Stuntboy'

“A fast-moving plot and relatable protagonist make this stand-alone sequel a good choice for boys who, like Derek, would rather reach for a TV remote or game controller than a book.” —School Library Journal on 'My Life as a Stuntboy'

“Fans of the first will be utterly delighted by this sequel and anxious to see what [Derek] will turn up as next.” —The Bulletin of the Center for Children's Books on 'My Life as a Stuntboy'

“This is a great package for kids, especially those like Derek who don't think they like to read.” —Booklist on 'My Life as a Stuntboy'