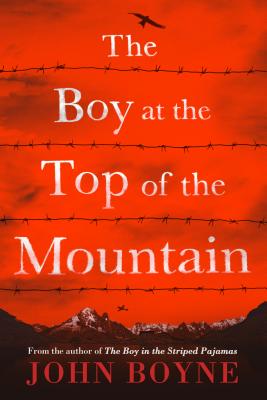 The Boy at the Top of the Mountain

The Boy at the Top of the Mountain by John Boyne, the author of The Boy in the Striped Pajamas, is another extraordinary historical fiction about World War II and innocence in the face of evil.

When Pierrot becomes an orphan, he must leave his home in Paris for a new life with his aunt Beatrix, a servant in a wealthy Austrian household. But this is no ordinary time, for it is 1935 and the Second World War is fast approaching; and this is no ordinary house, for this is the Berghof, the home of Adolf Hitler.

Pierrot is quickly taken under Hitler's wing and thrown into an increasingly dangerous new world: a world of terror, secrets, and betrayal from which he may never be able to escape. This title has Common Core connections.


Praise For The Boy at the Top of the Mountain…

The Boy at the Top of the Mountain:

"Boyne’s (The Boy in the Striped Pajamas, 2006) story is unarguably a powerful one with an often visceral impact." —Booklist


"a compelling account of the attractions of power, the malleability of youth and the terrible pain of a life filled with regret" —The Guardian

"John Boyne delivers a poignant tale of innocence ruined by Nazism. This is a story full of suspense and heartbreak that will leave readers wanting more. Compare this book to The Boy in the Striped Pajamas." —School Library Connection

Stay Where You Are and Then Leave:

"This is an excellent and approachable introduction to the traumas of war. . . . not simply a book about the horrors of shellshock but also a comprehensive depiction of many different aspects of life during World War I.” —School Library Journal

“Boyne has an eye for period details, an ear for dialogue, and a knack for creating individual, consistent characters.” —Booklist

“The Boy in the Striped Pajamas:

In the final pages, the tension rises precipitously and the harrowing ending, in which Bruno does finally act, is sure to take readers' breath away.” —Publishers Weekly

John Boyne is the author of Crippen, The Thief of Time, Next of Kin, and the New York Times and internationally bestselling The Boy in the Striped Pajamas. Boyne won two Irish Book Awards (the People’s Choice and the Children’s) for The Boy in the Striped Pajamas, which was made into a Miramax feature film, and his novels have been translated into more than thirty languages. Ireland's Sunday Business Post named him one of the forty people under forty in Ireland "likely to be the movers and shakers who will define the country's culture, politics, style and economics in 2005 and beyond." Crippen was nominated for the Sunday Independent Hughes & Hughes Irish Novel of the Year Award. He lives with his partner in Dublin.
Loading...
or support indie stores by buying on
(This book is on backorder)