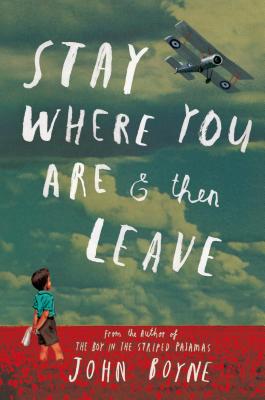 The day the First World War broke out, Alfie Summerfield's father promised he wouldn't go away to fight—but he broke that promise the following day. Four years later, Alfie doesn't know where his father might be, other than that he's away on a special, secret mission.

Then, while shining shoes at King's Cross Station, Alfie unexpectedly sees his father's name on a sheaf of papers belonging to a military doctor. Bewildered and confused, Alfie realizes his father is in a hospital close by—a hospital treating soldiers with shell shock. Alfie isn't sure what shell shock is, but he is determined to rescue his father from this strange, unnerving place.

“As in previous Boyne work (The Boy in the Striped Pajamas), unlikely encounters and occurences abound . . . it's made palatable by the third-person narration, which keeps readers experiencing events solely from Alfie's intelligent but childlike point of view.” —The Horn Book

“As much about familial love as about war, this novel tugs at the heartstrings, creating a sentimental but sound story that would shine as a classroom readaloud.” —BCCB

“Boyne, much like in The Boy in the Striped Pajamas (David Fickling Books, 2006), takes readers into the throes of war as seen through the eyes of a child.” —School Library Journal

“Another child's-eye view of war from the author of The Boy in the Striped Pajamas (2006); here the child is working class, the conflict, World War I . . . A vivid, accessible tale of the staggering price war exacts from those who had no voice in waging it.” —Kirkus Reviews

“In the final pages, the tension rises precipitously and the harrowing ending, in which Bruno does finally act, is sure to take readers' breath away.” —Publishers Weekly on The Boy in the Striped Pajamas

“Deeply affecting. . . beautiful and sparsely written.” —The Wall Street Journal on The Boy in the Striped Pajamas

“A small wonder of a book . . . this is what fiction is supposed to do.” —The Guardian on The Boy in the Striped Pajamas

“Powerful and unsettling . . . as memorable an introduction to the subject as The Diary of Anne Frank.” —USA Today on The Boy in the Striped Pajamas

John Boyne is the author of Crippen, The Thief of Time, Next of Kin, and the New York Times and internationally bestselling The Boy in the Striped Pajamas. Boyne won two Irish Book Awards (the People’s Choice and the Children’s) for The Boy in the Striped Pajamas, which was made into a Miramax feature film, and his novels have been translated into more than thirty languages. Ireland's Sunday Business Post named him one of the forty people under forty in Ireland "likely to be the movers and shakers who will define the country's culture, politics, style and economics in 2005 and beyond." Crippen was nominated for the Sunday Independent Hughes & Hughes Irish Novel of the Year Award. He lives with his partner in Dublin.