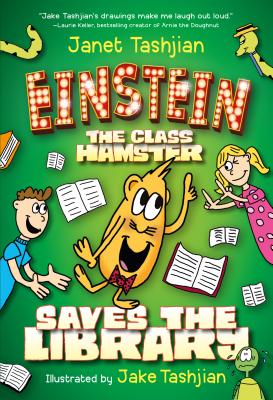 It's another day at Boerring Elementary: Einstein the class hamster, lover of fun facts, is getting ready for his game show when in walks Principal Decker with some bad news. Due to severe budget cuts, the school library will be closed for the rest of the year.

How is this possible? The library is the heart of the school! Einstein is determined to find a way to save the library. With the help of Marlon the turtle, his friend Ned, and Ms. Moreno's entire class, plans are put in motion!

Janet and Jake Tashjian are back with another winning story starring the lovable walking encyclopedia, Einstein the class hamster.

“Meet Einstein, class hamster and Alex Trebek wannabe. Einstein's Tasty Tidbits appear throughout, offering fun, informative, and occasionally disgusting facts (for instance, it's difficult to know if the waste from whales is vomit or poop). Tashjian's son Jake provides the line drawings that, while perhaps not the most artistic (Einstein looks a lot like Mr. Potato Head), are the most hysterical. A clever gigglefest of a series starter.” —Booklist

“* Give this to kids who think they don't like reading. It might change their minds.” —Booklist, starred review on My Life as a Book

“* A kinder, gentler Wimpy Kid with all the fun and more plot.” —Kirkus Reviews, starred review on My Life as a Book