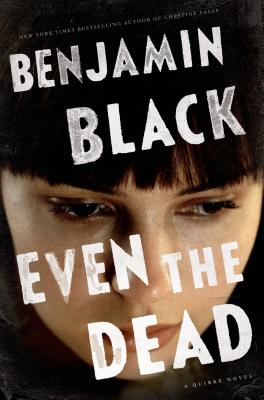 A suspicious death, a pregnant woman suddenly gone missing: Quirke's latest case leads him inexorably toward the dark machinations of an old foe

Perhaps Quirke has been down among the dead too long. Lately the Irish pathologist has suffered hallucinations and blackouts, and he fears the cause is a brain tumor. A specialist diagnoses an old head injury caused by a savage beating; all that's needed, the doctor declares, is an extended rest. But Quirke, ever intent on finding his place among the living, is not about to retire.

One night during a June heat wave, a car crashes into a tree in central Dublin and bursts into flames. The police assume the driver's death was either an accident or a suicide, but Quirke's examination of the body leads him to believe otherwise. Then his daughter Phoebe gets a mysterious visit from an acquaintance: the woman, who admits to being pregnant, says she fears for her life, though she won't say why. When the woman later disappears, Phoebe asks her father for help, and Quirke in turn seeks the assistance of his old friend Inspector Hackett. Before long the two men find themselves untangling a twisted string of events that takes them deep into a shadowy world where one of the city's most powerful men uses the cover of politics and religion to make obscene profits.

Even the Dead--Benjamin Black's seventh novel featuring the endlessly fascinating Quirke--is a story of surpassing intensity and surprising beauty.

“At the heart of Even the Dead is an insidious plot.... Black, the pen name of Booker Award-winning novelist John Banville, never worries about letting the plot dangle, breathing lovely, rich emotion through these pages with his unhurried, reflective prose.... You linger over his descriptions.”—Chicago Tribune

"There are now seven [novels] that feature Quirke, and by the latest, Even the Dead, they make a series with a complex intertwining of places, obsessions, memories, and characters, many of whom return frequently.... We can now look at the books as an ensemble that does something remarkable within the detective genre."—New York Review of Books

“EW’s books editor Tina Jordan is a major fan of Benjamin Black’s (author John Banville’s pen name) Quirke series — and his seventh, Even the Dead, is as great as ever. If you haven’t yet met Quirke, an alcoholic pathologist, prepare to binge read the first six books in a fever so you can get to this one.”—Entertainment Weekly (11 Books You Have to Read in January)

“With its flowing prose, penetrating observation and deft evocation of time and place, Even the Dead is an unalloyed pleasure from start to finish…. Banville/Black's masterly evocation of [Dublin], with its smoke-shrouded and boozy pubs, the decrepit, uncared-for buildings, the unruly traffic and the often depressed mien of the average Dubliner, is scarily accurate.” —The Independent (London)

"The pleasures of the narrative, the parade of eccentric characters, and the human dilemmas the plot exposes give us fiction of a high order."—Commonweal

“Reminiscent of the Maisie Dobbs series by Jacqueline Winspear or Charles Todd’s Ian Rutledge series…[Even the Dead] quickly draws readers in--even readers new to the series.... Benjamin Black (a pseudonym of John Banville) has a gift for finely drawn characters and small details. And Quirke's undeniable eccentricity lends him an irresistible charm that will keep the reader engaged until the very end.”—Shelf Awareness

“In Black’s hands, Dublin is a mysterious beauty menaced by its powerful elite. Quirke’s latest entanglement forces him to revisit some unresolved issues that go back to the series’ beginnings. . . . Fans will welcome this tying up of loose ends.”—Booklist

“While Quirke’s central narration cast an overarching gloom over previous novels, his surprising encounters here allow for brief rays of sun to shine through.” --Library Journal

Benjamin Black is the pen name of the Man Booker Prize-winning novelist John Banville. Black's books include The Black-Eyed Blonde, Christine Falls, The Silver Swan, among others. He lives in Dublin.
or
Not Currently Available for Direct Purchase