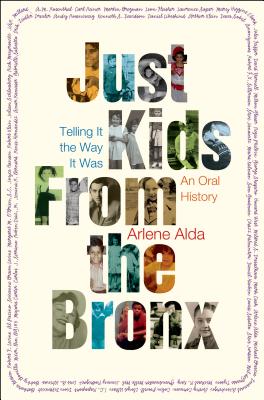 "Fascinating . . . . Made me wish I had been born in the Bronx." -Barbara Walters

The vivid oral histories in Arlene Alda's Just Kids from the Bronx reveal what it was like to grow up in the place that bred the influencers in just about every field of endeavor. The Bronx is where Michael Kay, the New York Yankees' play-by-play broadcaster, first experienced baseball; where J. Crew's CEO Millard ("Mickey") Drexler found his ambition; where Neil deGrasse Tyson and Dava Sobel fell in love with science; and where local music making inspired singer-songwriter Dion DiMucci and hip-hop's Grandmaster Melle Mel.

The parks, the pickup games, the tough and tender mothers, the politics, the gangs, the food-for people who grew up in the Bronx, childhood recollections are fresh. Arlene Alda's own Bronx memories were a jumping-off point from which to reminisce with a nun, a police officer, an urban planner, and with Al Pacino, Carl Reiner, Colin Powell, Maira Kalman, Bobby Bonilla, Mary Higgins Clark, and many other leading artists, athletes, scientists, and entrepreneurs-experiences spanning six decades of Bronx living. Alda then arranged these pieces of the past, from looking for violets along the banks of the Bronx River to the wake-up calls from teachers who recognized potential, into one great collective story, a filmlike portrait of the Bronx from the early twentieth century until today.

“More than 60 evocative oral histories . . . Just look at the angelic faces captured in the photographs that accompany each of the essays and ponder the question she [Arlene Alda] poses: 'How did they find a place for themselves?'” —The New York Times

“A loving portrait of a borough . . . Every story is a gem.” —The Huffington Post

“A nostalgic, sober and touching look at "Da Bronx" . . . will make you laugh and cry . . . . The four years it took to complete the book were worth the time; the project started "as a lark," and the end result is a home run, just like the kind Bobby Bonilla (also in the book) knows well.” —Philadelphia Examiner

“An amazing cross section of personal stories that takes the reader through the Bronx in the eyes-and the words-of some of the borough's most famous sons and daughters.” —New York Daily News

“A fabulous collection of 65 brief oral histories . . . . There are few readers who won't be touched by this affectionate look backward, which is as much about the universal state of childhood as the specific borough of the Bronx.” —Publishers Weekly

“Whether it was the women's changing room at Loehmann's department store, riding a bike to Pelham Bay Park or running to an apartment block to fetch someone for a telephone call at the corner store, living in the Bronx made an impression on all of them as they worked their way up the American dream ladder. . . . Entertaining and informative cherished memories from a diverse group from the Bronx.” —Kirkus Reviews

“Arlene Alda must be a great listener because all kinds of amazing people tell her remarkable things in Just Kids from the Bronx. No matter where you grew up, you'll find this a down-to-earth, inspiring book about the American promise fulfilled.” —President Bill Clinton

“Reading these interviews is akin to sitting on a stoop or a rooftop in any teeming Bronx neighborhood while voices with various accents, telling tales of various triumphs and adventures, rise up from the streets. Just Kids from the Bronx is both a cacophony and a chorus: a diverse collection of childhood memories that together form the singular, and very American, story of a remarkable place.” —Alice McDermott, National Book Award for Fiction winner and author of New York Times bestselling novel Someone

“The childhood recollections in Arlene Alda's fascinating Just Kids from the Bronx run the gamut from surprisingly funny to painfully shocking. For anyone anywhere who has wanted to achieve their heart's desire, Just Kids from the Bronx shows the early days of successful risk takers from that borough who have done it, each in his or her own way. Made me wish I had been born in the Bronx.” —Barbara Walters

“In these funny, intelligent, generous-spirited reminiscences, an extremely diverse group of Bronxites pay tribute to the borough where they were raised. Many of these are rags-to-riches impresarios whose riches are better known than their rags. Here, they give voice to the place that made them and in doing so, they make you fall in love with the Bronx, and with the resilience and moxy it seems to have bred in its sons and daughters. This is an enchanting collection.” —Andrew Solomon, New York Times bestselling author of Far From the Tree and National Book Award-winning author of The Noonday Demon

“Among the wonders of Arlene Alda's wondrous book is the stunning quality of the storytelling. Just Kids from the Bronx is a Bronx tale, to be sure--a collective picture of a place characterized by citizen yearnings to be elsewhere and the glorious discoveries and self-discoveries that come with staying put. But the parts that go into this whole are equally rich as pieces of literature. Nearly every one of these offerings, including the author's own, is a little work of art, each contributor foraging for the meaning and the music of a life. The result is America in a borough--at once hopeful, dangerous, regenerative, tough, joyous, and in the end, beautiful.” —Roger Rosenblatt, New York Times bestselling author of Making Toast and of The Boy Detective: A New York Childhood

“A terrific oral history . . . . Of the thousands of books I've read, this is the one I wish I had written. [But] I'm not claiming that I would have done it as well as Arlene Alda. . . . Of interest even to those who were not lucky enough to grow up Bronx.” —The Star-Ledger

Arlene Alda graduated Phi Beta Kappa from Hunter College, received a Fulbright Scholarship, and realized her dream of becoming a professional clarinetist, playing in the Houston Symphony under the baton of Leopold Stokowski. She switched careers when her children were young and became an award-winning photographer and author who has written nineteen books, including Just Kids from the Bronx. She is the mother of three daughters and the grandmother of eight. She and her husband, actor Alan Alda, live in New York City and Long Island.
Loading...
or support indie stores by buying on