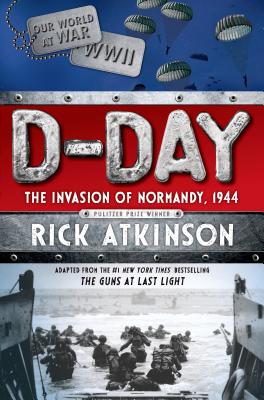 
Praise For D-Day: The Invasion of Normandy, 1944 [The Young Readers Adaptation]…

“Adapted from Atkinson's adult history of the latter part of WWII, The Guns at Last Light (2013), this is a brisk, busy, gutsy look at modern warfare's most famous offensive.” —Booklist

“*This fine adaptation of Atkinson's adult The Guns at Last Light is a readable, and even suspenseful, account of the final preparations for and successful execution of the D-Day invasion.” —School Library Journal, STARRED REVIEW

“This version of the much-admired The Guns at Last Light for younger audiences focuses on the drama and the astonishing scale of one of World War II's pivotal operations: the D-Day invasion . . . A grand and significant tale told with dash and authority.” —Kirkus Reviews

“A magnificent book . . . Though the story may seem familiar, I found surprising detail on every page . . . Atkinson's account of D-Day is both masterly and lyrical . . . [He] is an absolute master of his material.” —Max Hastings on The Guns at Last Light, The Wall Street Journal

“A tapestry of fabulous richness and complexity . . . Atkinson is a master of what might be called ‘pointillism history,' assembling the small dots of pure color into a vivid, tumbling narrative. . . . The Liberation Trilogy is a monumental achievement . . . densely researched but supremely readable.” —The New York Times Book Review on The Guns at Last Light

“Breathtaking, unforgettable . . . Atkinson provides us with especially poignant descriptions in a blaze of writing and research that matches the drama and significance of the moment, all without peer in modern history . . . This volume is a literary triumph worthy of the military triumph it explores and explains.” —The Boston Globe on The Guns at Last Light

Rick Atkinson is the bestselling author of the Liberation Trilogy—An Army at Dawn (winner of the Pulitzer Prize for History), The Day of Battle, and The Guns at Last Light—as well as The Long Gray Line and other books. His many additional awards include a Pulitzer Prize in journalism, a George Polk Award, and the Pritzker Military Library Literature Award. A former staff writer and senior editor at The Washington Post, he lives in Washington, D.C.
Loading...
or support indie stores by buying on
(This book is on backorder)