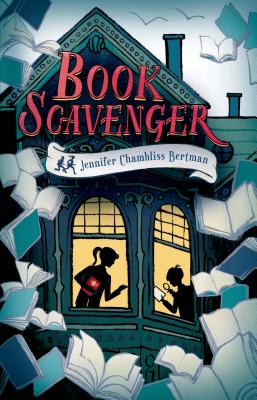 For twelve-year-old Emily, the best thing about moving to San Francisco is that it's the home city of her literary idol: Garrison Griswold, book publisher and creator of the online sensation Book Scavenger (a game where books are hidden in cities all over the country and clues to find them are revealed through puzzles). Upon her arrival, however, Emily learns that Griswold has been attacked and is now in a coma, and no one knows anything about the epic new game he had been poised to launch. Then Emily and her new friend James discover an odd book, which they come to believe is from Griswold himself, and might contain the only copy of his mysterious new game.

Racing against time, Emily and James rush from clue to clue, desperate to figure out the secret at the heart of Griswold's new game—before those who attacked Griswold come after them too.

A New York Times Bestseller!
An Amazon Best Book of the Year
An Indie Next List Pick

“Full of heart and replete with challenging ciphers for readers to decode, Bertman's debut is literary cousin to classic puzzlers like The Westing Game, and a story that values books and reading above other pursuits. Sure to be popular with voracious readers, it's also a valentine to anybody who knows that a 13-digit clue that begins with 978- is not a phone number.” —Publishers Weekly, Starred Review

“In her first novel, Jennifer Chambliss Bertman introduces a smart, resourceful 12-year-old who makes her first true friend through a mutual passion for solving puzzles. . . Fans of Escape from Mr. Lemoncello's Library will appreciate the abundant literary allusions, and readers will hope for more adventures, hinted at in the book's final lines.” —Shelf Awareness, starred review

“Emily's sleuthing weaves well with her journey to nurture friendships and set down everlasting roots. A debut that challenges the brain while warming the heart.” —Kirkus Reviews

“Well paced and involving, the story will intrigue kids with an interest in mysteries and codes as well as books. The writing includes references to local landmarks as well as literary allusions to Jack Kerouac, Robert Louis Stevenson, and, especially, Edgar Allan Poe. A lively first novel.” —Booklist

“A love letter to San Francisco and its literary history, this well-paced novel of intrigue also provides quite the education, namedropping the likes of Jack Kerouac, Dashiell Hammett, and Amy Tan, diving into the world of ciphers, and offering bountiful brainteasers with Dickensian naming devices (there's an explanatory author's note), all while maintaining a skillful and satisfying balance of brains and heart. . . . be prepared to start a Book Scavenger chapter (pun intended) in your own library, stat.” —The Bulletin

“The plot is clever and the pace of the book will keep the readers curious up to the climactic end. Several other books with themes related to puzzles and games are alluded to in the story. This book will be fun for lovers of this genre.” —VOYA

“A puzzle-mystery in the spirit of The Westing Game, Book Scavenger challenges readers to play along. The codes and puzzles are pitched at the perfect level for tween sleuths, and the literary references . . . will pique readers; interests in doing some scavenging of their own. Part friendship story, part travel adventure and part cryptography manual, Jennifer Chambliss Bertman's debut is a book lover's delight.” —Bookpage

“Codes and ciphers star in this puzzle-game of a novel, offering challenges for code-breaking fanatics plus plentiful explanations for those who prefer that someone else do the legwork” —The Horn Book

Jennifer Chambliss Bertman was born and raised in the San Francisco Bay Area. She holds an MFA in creative writing and has worked for literary agencies, magazines, educational publishers, and as a freelance copyeditor and proofreader. Book Scavenger is her debut novel.
Loading...
or support indie stores by buying on