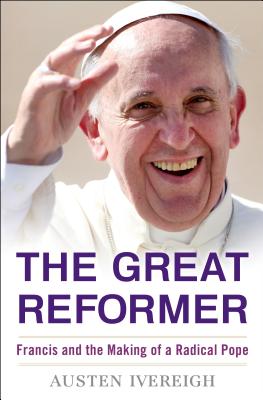 An expansive and deeply contextual work, at its heart The Great Reformer is about the intersection of faith and politics--the tension between the pope's innovative vision for the Church and the obstacles he faces in an institution still strongly defined by its conservative past. Based on extensive interviews in Argentina and years of study of the Catholic Church, Ivereigh tells the story not only of Jorge Mario Bergoglio, the remarkable man whose background and total commitment to the discernment of God's will transformed him into Pope Francis--but the story of why the Catholic Church chose him as their leader.

With the Francis Revolution just beginning, this biography will provide never-before-explained context on how one man's ambitious program began--and how it will likely end--through an investigation of Francis's youth growing up in Buenos Aires and the dramatic events during the Perón era that shaped his beliefs; his ongoing conflicts and disillusionment with the ensuing doctrines of an authoritarian and militaristic government in the 1970s; how his Jesuit training in Argentina and Chile gave him a unique understanding and advocacy for a "Church of the Poor"; and his rise from Cardinal to the papacy.

“Easily the best treatment of Pope Francis's Argentine background in English, written by someone who knows Catholicism inside and out. Masterful, indispensable, and gripping.” —John L. Allen Jr., associate editor, Cruz and The Boston Globe

“Ivereigh has written the best available chronicle of the formative events in the life and thinking of Jorge Mario Bergoglio and demonstrates how his call for a ‘Church in permanent mission' extends and deepens the ‘New Evangelization' proclaimed by St. John Paul II.” —George Weigel, author of Evangelical Catholicism"

“Readers...will revel in the intricate parallels between the personal life of the pope and the socio-political environment he was raised in and inhabits now...A meticulous and lovingly written biography that will please both knowledgeable and amateur readers.” —Library Journal

“Consider this book the cornerstone of any collection on Pope Francis and twenty-first-century Christianity.” —Ray Olson, Booklist (STARRED REVIEW)

“[Ivereigh] is the ideal papal biographer...[A] detailed and well-written examination of Pope Francis. ...With its wealth of biographical information that offers an in-depth look at formative influences, this is the best examination of the current pope to date.” —Publishers Weekly

“An in-depth picture of Jorge Bergoglio...already being spoken of as the definitive biography of this Pope. Ivereigh[is] uniquely fitted for the task by an Oxford University doctorate that was an investigation into the Church and politics in Argentina between 1930 and 1960. A fluent Spanish speaker, this expertise gained him unrivalled access to the Jesuits in Argentina during his research and enabled him to read everything Pope Francis has ever written. When he went on to attend and report on last month's synod, he had possibly the greatest understanding of any lay person there of what was actually going on, why, and what it would mean.” —Christian Today

Austen Ivereigh is a British writer, journalist, and commentator on religious and political affairs who holds a PhD from Oxford University. His work appears regularly in the Jesuit magazine America and in many other periodicals. He is well-known as a Catholic commentator for the BBC, Sky, ITV, and Al-Jazeera.