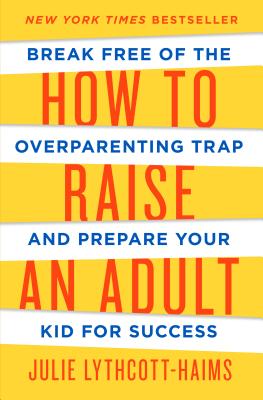 How to Raise an Adult

"Julie Lythcott-Haims is a national treasure. . . . A must-read for every parent who senses that there is a healthier and saner way to raise our children." -Madeline Levine, author of the New York Times bestsellers The Price of Privilege and Teach Your Children Well

"For parents who want to foster hearty self-reliance instead of hollow self-esteem, How to Raise an Adult is the right book at the right time." -Daniel H. Pink, author of the New York Times bestsellers Drive and A Whole New Mind

In How to Raise an Adult, Julie Lythcott-Haims draws on research, on conversations with admissions officers, educators, and employers, and on her own insights as a mother and as a student dean to highlight the ways in which overparenting harms children, their stressed-out parents, and society at large. While empathizing with the parental hopes and, especially, fears that lead to overhelping, Lythcott-Haims offers practical alternative strategies that underline the importance of allowing children to make their own mistakes and develop the resilience, resourcefulness, and inner determination necessary for success.

Relevant to parents of toddlers as well as of twentysomethings-and of special value to parents of teens-this book is a rallying cry for those who wish to ensure that the next generation can take charge of their own lives with competence and confidence.


Praise For How to Raise an Adult: Break Free of the Overparenting Trap and Prepare Your Kid for Success…

“This is the stuff of the best parenting advice . . . . A worthwhile read for every parent . . . . Our children are engaged in the serious work of becoming an adult. With this book, Lythcott-Haims provides the missing user manual.” —The Chicago Tribune

“This book is the antidote to helicopter parenting. Lythcott-Haims’ research, combined with a decade of experience as a Stanford dean, makes for some important insights into the state of parenting in America today.”—San Francisco Chronicle

“[How to Raise an Adult] may just be the Black Hawk Down of helicopter parenting. Lythcott-Haims, who brings some authority to the subject as Stanford’s former dean of freshmen and undergraduate advising, has seen varieties of extreme parental interference suggesting not just a lack of common sense, but a lack of wisdom and healthy boundaries . . . .When parents laugh and enjoy the moment but also teach the satisfaction of hard work, when they listen closely but also give their children space to become who they are, they wind up with kids who know how to work hard, solve problems and savor the moment, too. In other words, get a life, and your child just might do the same someday.”—The New York Times Book Review

“[How to Raise an Adult] is refreshing in many ways, and as parents ourselves, we highly recommend it.”—The News & Observer

“Lythcott-Haims breaks down the source of helicopter parenting habits, and uses studies and stories to illustrate the developmental, emotional, and psychological toll that overparenting can take on children. She also gives parents some constructive tips for stepping back and allowing the next generation of leaders to become fully formed adults.”—MSNBC “Melissa Harris-Perry”

“Julie Lythcott-Haims, I hope my child has a dean, teacher, others like you out there . . . Thank you for spreading this really important and powerful message.”—FOX “Fox & Friends”

“At last, a parenting book I can get behind.”—The Independent (UK)

“Run, don’t walk to your nearest bookstore and get this book! It’s Malcolm Gladwell meets Paul Tough meets Madeline Levine in a fresh, timely take on raising excellent adults from former Stanford freshmen admissions dean and parent Julie Lythcott-Haims.Never preachy, and oh-so-relatable Lythcott-Haims is spot-on with her approach to parenting, over-parenting, and preparing your children for the adult world.”—Speaking of Apraxia

“In her easy-to-read prose . . . . the author does a superb job of laying out the facts . . . . Her advice is sound and obviously much needed . . . if parents want to raise productive adults.” —Kirkus Reviews

“Lythcott-Haims presents a convincing vision of overprotected, overparented, overscheduled kids . . . . After presenting the problem in detail (through interviews with college admissions officers, educators, parents, and others), she offers a number of viable solutions . . . . This vigorous text will give parents the backup needed to make essential changes.” —Publishers Weekly

“Julie Lythcott-Haims is a national treasure. She is a psychologist, sociologist, and anthropologist rolled into one, recording the attitudes and rituals of 21st-century smart kids who can't tie their shoelaces--and of their anxious, hovering parents. Reminding us that we are charged with transforming children into adults capable of meeting the challenges of life head-on, Lythcott-Haims dispenses compassion and a good kick in the pants in equal and appropriate measure. Witty, wise, and dead-on, Lythcott-Haims is a tonic for what ails this generation of kids and parents. A must-read for every parent who senses that there is a healthier and saner way to raise our children.” —MADELINE LEVINE, author of the New York Times bestsellers The Price of Privilege and Teach Your Children Well

“Have the good intentions of American parents gone awry? In this timely and bracing work, Julie Lythcott-Haims chronicles the many dangers of overparenting--from thwarting children's growth to hurting their job prospects to damaging parents' own well-being. Then she charts a smart, compassionate alternative approach that treats kids as wildflowers to be nourished rather than bonsai trees to be cultivated. For parents who want to foster hearty self-reliance instead of hollow self-esteem, How to Raise an Adult is the right book at the right time.” —DANIEL H. PINK, author of the New York Times bestsellers Drive and A Whole New Mind

“I've loved this book from the moment I saw the title. Julie Lythcott-Haims understands that the goal of parenting should be to raise autonomous adults, not have name-brand college admissions to brag about. Her double perspective--as a mother of teenagers and a former longtime freshman dean at Stanford--makes her uniquely equipped to show parents how to do exactly that. Wise, honest, compassionate, and deeply informed, How to Raise an Adult ought to be at the top of everybody's stack of parenting books.” —WILLIAM DERESIEWICZ, author of the New York Times bestseller Excellent Sheep: The Miseducation of the American Elite and the Way to a Meaningful Life

“While the book aims to show us how to better raise adults, Lythcott-Haims also shows how this will make us better adults. . . .The timing of Lythcott-Haims wonderful book could not be better. The pendulum has swung away from helicopter parenting (just this week new research on the damage it does) and parents are looking for the guidance and insight in finding a better way. Lythcott-Haims offers readers just that.” —Grown and Flown

“Lythcott-Haims ... makes compelling arguments for why we need to break our current habits. Unlike so many other college parenting books, however, How to Raise an Adult contains practical suggestions for an alternative way of parenting and then encourages us that it is possible to function differently.” —College Parent Central

“This book will constantly be a guide . . . . Now that I have read [it], I will be aware of the fact that as a parent I am going to raise a responsible well-adjusted adult who will be able to thrive in the real world; not a child who will need support all her life.—Diva Likes