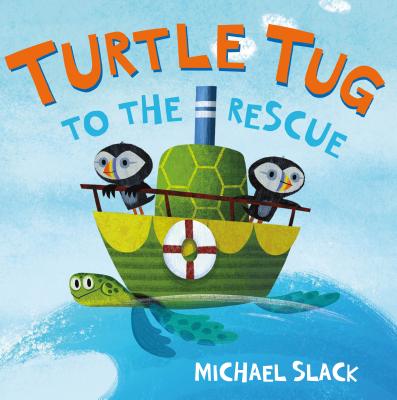 Turtle Tug to the Rescue

Turtle Tug is on the lookout! This chugging, tugging turtle powers through gusty winds and treacherous tides, combing the seas to protect his friends from a dangerous storm. From panicking puffins to entangled sperm whales, Turtle Tug is out to rescue all his sea-dwelling friends. He's a turtle tugboat on a mission to make the world a safer place.


Praise For Turtle Tug to the Rescue…

"The pictures may be the best in the series . . .Turtle Tug is a [. . .] steady hero, and his steely determination to save the day is admirable and inspiring."--Publishers Weekly

"Slack’s rhyming lines grow more urgent with the change in weather, echoing the escalating chaos in the colorful, richly textured artwork. Little ones will cheer on charming Turtle Tug in this story that playfully emphasizes perseverance, bravery, and togetherness."-Booklist

"The third installment of Slack's wildly inventive animal/rescue-vehicle hybrids . . . A role model for all, levelheaded Turtle Tug keeps his cool even in times of danger."-Kirkus Reviews

“Ahh! The cuteness! It blinds! . . . Kids will instinctively get it and probably love it.”—Booklist

Praise for Monkey Truck:
"My three-year-old loves Michael Slack's new picture book Monkey Truck…The artwork is great, colorful and elaborated with lots of details that are fun to talk about during storytime. All told, it's a darned fun storytime treat." —Cory Doctorow, BoingBoing.com

"The bright, blocky and, above all, goofy digitally painted illustrations will grab attention, and Monkey Truck's hooting mug (and tooting bottom) will keep the giggles flowing. Hope for more from this outrageous imagination." —Kirkus Reviews

"Slack's digitally rendered artwork is abundant with enjoyable texture and detail, and the jungle citizens are remarkably expressive." —Bulletin of the Center for Children's Books

Michael Slack is the creator of Monkey Truck and Elecopter. He is an artist and character designer whose work has been featured in books, television, and games. He lives in Lafayette, California with his wife and daughter.

Michael Slack is the creator of Monkey Truck and Elecopter. He is an artist and character designer whose work has been featured in books, television, and games. He lives in Lafayette, California with his wife and daughter.
Loading...
or
Not Currently Available for Direct Purchase