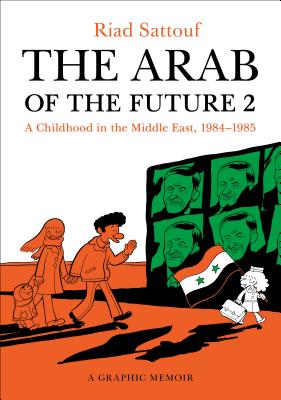 The Arab of the Future 2

The highly anticipated continuation of Riad Sattouf’s internationally acclaimed, #1 French bestseller, which was hailed by The New York Times as “a disquieting yet essential read”

In The Arab of the Future: Volume 1, cartoonist Riad Sattouf tells of the first years of his childhood as his family shuttles back and forth between France and the Middle East. In Libya and Syria, young Riad is exposed to the dismal reality of a life where food is scarce, children kill dogs for sport, and his cousins, virulently anti-Semitic and convinced he is Jewish because of his blond hair, lurk around every corner waiting to beat him up.

In Volume 2, Riad, now settled in his father’s hometown of Homs, gets to go to school, where he dedicates himself to becoming a true Syrian in the country of the dictator Hafez Al-Assad. Told simply yet with devastating effect, Riad’s story takes in the sweep of politics, religion, and poverty, but is steered by acutely observed small moments: the daily sadism of his schoolteacher, the lure of the black market, with its menu of shame and subsistence, and the obsequiousness of his father in the company of those close to the regime. As his family strains to fit in, one chilling, barbaric act drives the Sattoufs to make the most dramatic of changes.

Darkly funny and piercingly direct, The Arab of the Future, Volume 2 once again reveals the inner workings of a tormented country and a tormented family, delivered through Riad Sattouf’s dazzlingly original talent.

Riad Sattouf is a best-selling cartoonist and filmmaker who grew up in Syria and Libya and now lives in Paris. The author of four comics series in France and a former contributor to the satirical publication Charlie Hebdo, Sattouf is now a weekly columnist for l’Obs. He also directed the films The French Kissers and Jacky in the Women’s Kingdom.
Loading...
or support indie stores by buying on