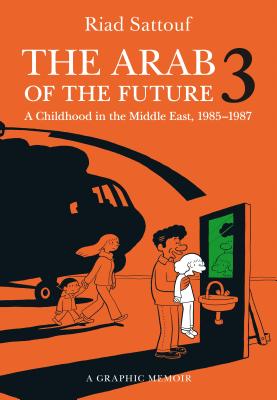 The Arab of the Future 3

In the third installment of the acclaimed series, the Sattouf family begins to implode under the pressure of Hafez al-Assad's regime and the suffocation of their rural Syrian village.

The Arab of the Future is the widely acclaimed, internationally bestselling graphic memoir that tells the story of Riad Sattouf’s peripatetic childhood in the Middle East. In the first volume, which covers the years 1978–1984, his family moves between rural France, Libya, and Syria, where they eventually settle in his father’s native village of Ter Maaleh, near Homs. The second volume recounts young Riad’s first year attending school in Syria (1984–1985), where he dedicates himself to becoming a true Syrian in the country of Hafez al-Assad. In this third volume, (1985–1987), Riad’s mother, fed up with the grinding reality of daily life in the village, decides she cannot take it any longer. When she resolves to move back to France, young Riad sees his father torn between his wife’s aspirations and the weight of family traditions.

"God bless whatever Proustian madeleine spurred Riad Sattouf to put pen to paper for his The Arab of the Future series. Over the past three years, the Franco-Arab cartoonist has been producing a truly fantastic serialized graphic memoir about his boyhood in France and the Middle East."
—Vulture

“Essential reading . . . As the series builds in maturity and depth, Sattouf depicts in unsettling detail how political and religious indoctrination can infect even the most well-meaning idealists.”
—Publishers Weekly (starred review)

“An excellent addition to a series that for years to come is sure to engage readers of history as seen through a child’s eyes.”
—Library Journal (starred review)

Praise for The Arab of the Future 2


Praise for The Arab of the Future

"One of the most prominent cartoonists in the world right now."
—Smithsonian

“The Arab of the Future has become that rare thing in France’s polarized intellectual climate: an object of consensual rapture, hailed as a masterpiece in the leading journals of both the left and the right. . . . it has, in effect, made Sattouf the Arab of the present in France.”
—Adam Shatz, The New Yorker

“As the very young Riad Sattouf navigates life in Libya, France, and Syria, he gets a serious education in the mysterious vectors of power that shape not just the political world, but the intimate sphere of his own family. With charming yet powerful drawings and vivid sensory details, Sattouf delivers a child’s-eye view of the baffling adult world in all its complexity, corruption, and delusion. This is a beautiful, funny, and important graphic memoir.”
—Alison Bechdel, author of Fun Home

“The hundred-and-fifty-odd pages of Riad Sattouf’s internationally bestselling graphic memoir . . . move with an irrepressible comic velocity. The book is told Candide-style . . . an indictment of the adult world and its insidious methods of diminishment we all have either faced or been fortunate enough to escape.”
—The New Republic

“Engaging and lovely to look at . . . Sattouf has an eye for grimly funny details . . . and milks the disjunction between how he experienced his political environment at the time and how he understands it now for all it's worth.”
—Douglas Wolk, Los Angeles Times

“Sattouf’s work is laced with astute observations of human beings. His memoirs often dwell on their failings: hypocrisy, cowardice, bullying. Yet there’s humour too – mainly because his humans are so helplessly absurd.”
—The Guardian

“The Arab of the Future is already being compared to biographical classics like Maus and Persepolis, and the modern relevance of the countries in which it is set is sure to make this a widely talked about book this year.”
—Mentalfloss.com

“The Arab of the Future maintains a balance of comedy and commentary and …is carried by excellent drawings. Riad Sattouf’s work takes its place alongside other classic animated retrospective memoirs from the region, Persepolis . . . and Waltz with Bashir.”
—The New York Journal of Books

“Seriously funny and penetratingly honest, Riad Sattouf tells the epic story of his eccentric and troubled family. Written with tenderness, grace, and piercing clarity, The Arab of the Future is one of those books that transcend their form to become a literary masterpiece.”
—Michel Hazanavicius, director of The Artist

“The Arab of the Future is a beautifully cartooned story that is both modern and timeless. The protagonist is one of the most endearing in comics. An important book, not just as art but as a window into another culture.”
—Gene Luen Yang, author of American Born Chinese

“The Arab of the Future confirms Riad Sattouf’s place among the greatest cartoonists of his generation.”
—Le Monde

“In his comics, Sattouf deftly weaves the political background with the everyday. He tells a personal story but also observes the society and country around him, and his great sense of humor makes reading the book thoroughly enjoyable. It’ll have you laughing to the point of tears.”
—Haaretz

“Sattouf’s account of his childhood is a deeply personal recollection of a peripatetic youth that can resonate with audiences across the world. It also paints an incisive picture of the Arab world in the late 1970s and early 1980s that sets the stage for the revolutionary changes that would grip and roil the region decades later.”
—Foreign Policy

“Despite his father’s determination to integrate his son into Arab society, little Sattouf—with his long blond hair—never fully fits in, and this report reads like the curious pondering of an alien from another world. Caught between his parents, Sattouf makes the best of his situation by becoming a master observer and interpreter, his clean, cartoonish art making a social and personal document of wit and understanding.”
—Publishers Weekly (starred review, Most Anticipated Books of Fall 2015)

Riad Sattouf is a best-selling cartoonist and filmmaker who grew up in Syria and Libya and now lives in Paris. The author of four comics series in France and a former contributor to the satirical publication Charlie Hebdo, Sattouf is now a weekly columnist for l’Obs. He also directed the films The French Kissers and Jacky in the Women’s Kingdom.
Loading...
or support indie stores by buying on
(This book is on backorder)