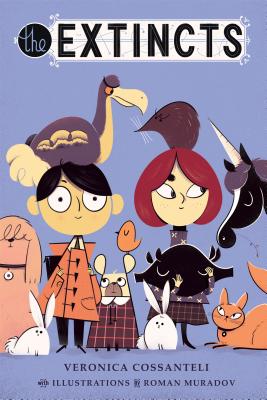 George is looking for a job in order to raise money for a new bike, so when he sees a help wanted ad for Wormestall Farm, he goes for it. Before long, he's embroiled in a madcap adventure involving creatures both (supposedly) extinct and (previously thought to be) mythological, a new friend (a girl!), and a maniacal taxidermist who wants the animals of Wormestall Farm in her own private collection . . . stuffed, of course.

“A breezy adventure with just the right amount of oddball charm.” –Booklist

"A fantastical adventure of mystery and imagination." –School Library Journal

Veronica Cossanteli is an elementary school teacher who lives with three cats, two snakes, one guinea pig, and a large assortment of lizards. The Extincts is her first novel.

Roman Muradov is an illustrator and cartoonist from Moscow, Russia, currently living in San Francisco. His clients include the New Yorker, the New York Times, NPR, Google, and many others. His work has been featured in the Society of Illustrators (Gold Medal), American Illustration, and numerous other shows.
Loading...
or support indie stores by buying on