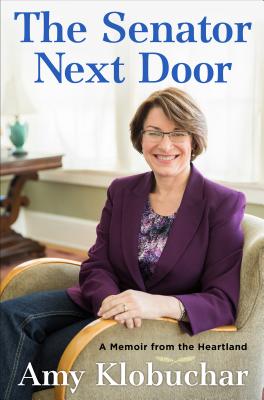 The Senator Next Door

A Memoir from the Heartland

One of the U.S. Senate's most candid--and funniest--women tells the story of her life and her unshakeable faith in our democracy

Minnesota Senator Amy Klobuchar has tackled every obstacle she's encountered--her parents' divorce, her father's alcoholism and recovery, her political campaigns and Washington's gridlock--with honesty, humor and pluck. Now, in The Senator Next Door, she chronicles her remarkable heartland journey, from her immigrant grandparents to her middle-class suburban upbringing to her rise in American politics.

After being kicked out of the hospital while her infant daughter was still in intensive care, Klobuchar became the lead advocate for one of the first laws in the country guaranteeing new moms and their babies a 48-hour hospital stay. Later she ran Minnesota's biggest prosecutor's office and in 2006 was the first woman elected to the U.S. Senate from her state. Along the way she fashioned her own political philosophy grounded in her belief that partisan flame-throwing takes no courage at all; what really matters is forging alliances with unlikely partners to solve the nation's problems.

Optimistic, plainspoken and often very funny, The Senator Next Door is a story about how the girl next door decided to enter the fray and make a difference. At a moment when America's government often seems incapable of getting anything done, Amy Klobuchar proves that politics is still the art of the possible.


Praise For The Senator Next Door: A Memoir from the Heartland…

“Klobuchar, the daughter of a longtime columnist for the Star Tribune in Minneapolis, has a reporter's eye for an anecdote. In her 356-page book, she writes about lessons learned. . . . The Senator Next Door [is] about avoiding the sort of blistering rhetoric and political posturing that makes it hard to forge alliances across party lines to get things done. . . . The book is threaded with tougher lessons, including dealing with her father's alcoholism and her daughter's serious medical problems at birth.” —USA Today

“From the halls of her high school all the way to the United States Senate, Amy Klobuchar's journey is one of incredible perseverance and success. Her story radiates with warmth, humor, and candor. I hope it will inspire women everywhere to take part not only in public life, but in all endeavors in their lives, with the same passion.” —Sheryl Sandberg, author of Lean In

“In this warm and wise book, Senator Klobuchar shows that the ability to find common ground-and to use down-home common sense-is the key to leadership in a democracy. In the tradition of Ben Franklin, she knows that compromisers may not make great heroes, but they do make great democracies. Her book is both a desperately needed wakeup call to our politicians and a delightful memoir that will inspire everyone. Buy one for yourself and give one to an elected official.” —Walter Isaacson, author of Steve Jobs and Benjamin Franklin

“I absolutely loved this book and could not put it down. It's smart, funny, moving, and filled with wisdom and insight. I especially related to the extraordinary stories about Amy's immigrant grandparents. The Senator Next Door left me deeply inspired, with renewed hope for the American Dream.” —Amy Chua, author of Battle Hymn of the Tiger Mother and The Triple Package

“Amy Klobuchar wrote the Lean In of political memoirs... [S]he talks about the events and people that shaped her political beliefs, with some disarmingly funny and honest asides.... [W]e need more politicians like Klobuchar-who can tell their stories energetically and with humor, presenting themselves as dynamic public figures.” —Laura Reston, The New Republic

“Even at her own wedding, Minnesota U.S. Sen. Amy Klobuchar writes in her new book, she weathered bromides about one day running for president. In The Senator Next Door, an autobiography Klobuchar penned without a ghost writer, she writes about her trajectory from a middle-class Plymouth upbringing to the U.S. Senate, with stops along the way at Yale University and the Hennepin County attorney's office.” —The Star Tribune

“Klobuchar's memoir paints the picture of a steady, indefatigable, honest servant of the people. She tells candid (good and bad) stories of growing up the daughter of a legendary local newspaper reporter, her early witnessing of the dangers of alcohol abuse, the end of her parents' marriage, her daughter's early health problems, her first campaign, and her experiences in Washington...[R]efreshingly genuine...Readers will come away feeling a bit more positive about the political system and the people working within it.” —Publishers Weekly

Amy Klobuchar, the daughter of a newspaperman and a schoolteacher, is Minnesota's senior United States Senator. A Democrat, she was first elected to the Senate in 2006; she was later reelected in a landslide and named to Senate leadership. A national leader, she has a well-earned reputation for working across the aisle to pass legislation that supports families, workers and businesses. She and her husband John have a daughter, Abigail, who is in college.
Loading...
or
Not Currently Available for Direct Purchase