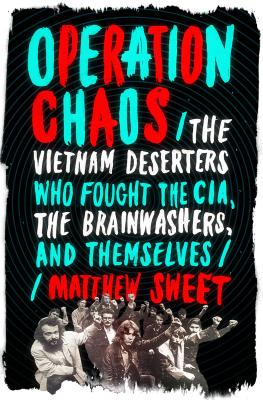 An untold Cold War story: how the CIA tried to infiltrate a radical group of U.S. military deserters, a tale that leads from a bizarre political cult to the heart of the Washington establishment


Praise For Operation Chaos: The Vietnam Deserters Who Fought the CIA, the Brainwashers, and Themselves…

"In this meld of history and reportage, the deserters’ stories, and those of dozens of revolutionaries, hosts, and spies, coalesce into an often moving examination of loyalty and dissent. Sweet details an undercover C.I.A. mission to disrupt defection, and sheds light on the exiles’ complex motives. His quest to track down all the major players in the story takes him, variously, to a maximum-security prison, a cannabis refinery, and Paris cafés."—The New Yorker

"As humorously fascinating as it is deeply disturbing....Operation Chaos offers a new look at the era and the war that forgoes the usual combat and political narratives in favor of something truly strange and bizarre, rife with countless rabbit holes, plot twists and questionable characters and motives." —Spectrum Culture

"[Sweet] has reassuringly inserted himself into the narrative as a sane and rational guide down a weird rabbithole...Keeping a foot in the real world, he tries kindly but firmly to extract the truth concealed among buried memories and long-cherished fantasies.” —The Arts Desk

"Sweet evocatively sketches his quest....He injects himself into the narrative from the beginning, diligently recording how he tracked down and interviewed many of his subjects...Fascinating." —Publishers Weekly

"A surprising, tragic, and, in many places, angry story of a country's paranoia inflicting itself upon its own citizens." —Booklist

“From his book’s opening pages, Matthew Sweet lured me into a looking-glass world of deserters, radicals, spies, and cultists, following them from Vietnam to Sweden to America, with many improbable stops along the way. Operation Chaos tells an American story that had been lost to history, one where people are not always who they seem to be and suspicions have a hard time keeping pace with reality.”
—Bryan Burrough, author of Days of Rage and Public Enemies

“Operation Chaos adds a new and fascinating chapter to the story of the Vietnam War. It will amaze anyone who thinks the war was fought only in Vietnam, that it was fought only with guns and bombs, or that it is truly over.”
—Stephen Kinzer, author of All the Shah’s Men, The Brothers, and The True Flag